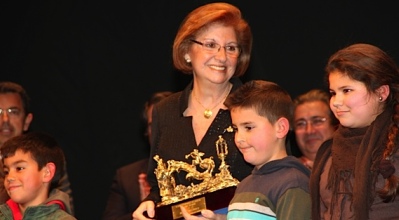 During the course of an emotional event, held on 23 d December, at the Teatro Lope de Vega, and which was attended, among others, the Mayor, Hon. Mr. D. Juan Ignacio Zoido Alvarez, Delegate of Fiests Seniors, Hon. Mr. D. Gregorio Serrano and President of the Council of Fraternities, D. Arenas Adolfo Castillo, N ª H ª D ª Maruja Vilches Trujilloreceived the award “Luis Baquero 2012” awarded by the program radiofónicode Easter,Canal Sur, El Llamdor. It recognizes the meticulous work that has developed the honoreefor the disadvantaged, especially in the neighborhood of the South Industrial Park, wherethe work performed Fraternitas program, which is the main impulsura. The Brotherhood of the Macarena wanted to accompany her on this well deserved recognition and and was represented by a delegation of the Governing Board headed by the Deputy Big Brother, D. Álvaro García García-Carranza.