Restored the balustrade of the choir of the Basilica 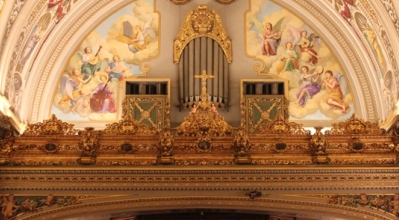 It has recently been replaced, after restoration, the balustrade of the choir, magnificent piece of carving from the old way of Christ.It houses parts of the litter seventeenth century Baroque, together with those made by Vicente Hernandez Couquet reform in 1854, and Jose Gil, in 1900. The intervention was carried out Ms Grace Montero and D. Saucedo Reina Luis Machin workshop belonging to the prestigious “Art and Conservation Arce,” according to the following report:

“SUMMARY OF THE WORK OF STORE-MADE IN THE RESTORATION OF THE CHOIR BALUSTRADE Basilica Macarena, Seville.”

During the months of July to December 2011 the company Arce, art and conservation has conducted conservation-restoration work in the “balustrade of the choir of the Basilica of the Macarena.”

The most significant changes arising in the support of the attack were also eating insects affecting wood, broken pieces and numerous volumes of size with mobility such as central reliefs.

The surface of the gold had significant adhesion problems affecting the underlying preparation layer, giving rise to numerous surveys over the entire surface and repainting presence of losses and glitter. Across the board, the flesh tones had a marked darkening due to accumulated surface dirt (deposits of dust, smoke candles) and oxidation of the paint layer.

First, to ensure the eradication of wood boring insect biological attack affecting the balustrade, was made the treatment of fumigation and disinfection technique transformed with inert gas atmospheres.

The treatment consisted of applying inert gas (high purity nitrogen) to the balustrade located within a hermetically sealed bubble within which remained an atmosphere in which oxygen is replaced by the inert gas, killing by anoxia insects at any stage of their life cycle (egg, pupa, larva and adult insect).

With this specialized method of decontamination, is achieved by a total removal efficiency of xylophagous insects, as the inert gas replaces oxygen in the entire thickness of the wood. The treatment ensures at all times, proper maintenance of the rail without causing physical and chemical changes in materials and providing greater safety for the health of people, and unused toxic products.

The intervention of conservation and restoration carried out in support lígneo, highlight the bonding of the many pieces of the size that had fractured or structural mobility. To strengthen the joint assemblies, inner ears were made of beech wood with polyvinyl acetate. In some cases it was necessary to reinforce the support in its reverse fractured by metal plates or strips.
It should be noted the removal of many metallic elements, mainly nails, which were causing fissures or cracks in the support due to the movements of contraction and expansion of wood with changing humidity and temperature. For consolidation of fine cracks were introduced cedarwood chirlatas curing polyvinyl acetate and fine cracks was used as sawdust filler sieving and polyvinyl acetate.

In the layers of gold and polychrome after vacuuming the thick layer of dust treatments were performed fixing the uprisings that affect the oxidized varnish and overpainting existing number.

Chromatic reintegration was carried out by reversible watercolor technique, only the most important wear layer of gold and red bowl. The layers of white preparation of the edges of the lagoons were toned imitating the color of the wood. Finally, it was applied a thin layer of protective finish.