Restored the Banner of the Brotherhood 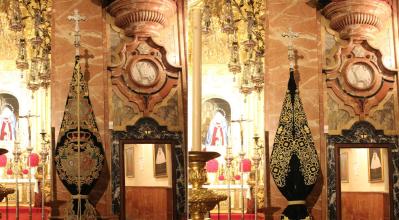 Have been completed as scheduled restore jobs of our banner work has been done in the workshop of “Esperanza Elena Caro Successors”, currently led by our sister Carlota Helena.

The corporate banner of the Brotherhood of the Macarena is an exceptional piece of embroidery made in the workshops of “Sobrinos de José Caro” in, as shown in the bottom of the bottom bracket, “year of our Lord / 1973”

The work is an almost exact reproduction of the standard that the Brotherhood used hitherto held in the same workshop in 1936, designed by D. Ignacio Gomez Millan.

The new flagship reproduced above but giving a few inches high and varying the embroidery on the back, which in the ancient enhancement is fully embroidered and the new was limited to simply decorated with warp and string.

The work, whose function is to represent the Brotherhood in all events where necessary, can be classified into the category of fabrics with surface decoration (embroidery). The technique used is that tended to enhance gold, decorated with colored threads and imagery.

In terms of design, the standard can be divided into four parts:

– The plant, which consists of a gold-embroidered cartouche with the coat of the Brotherhood, framed by the Royal Crown and Fleece.

– The upper, with embroidered cartouche “Milanese” with the heraldry of the Cathedral Chapter.

– The lower or enagüilla, with a design similar to the previous implementation, but by representing the shield of the city of Seville.

Both areas are framed by a gallon embroidery as well in “Milanese” which contains different shields associated with the Brotherhood. The rest of the decor is typically Baroque, with leaves, flowers and ribbons linked together.

– Finally, the back, which to this intervention was limited to a hawser and lace decoration imitating the standard drawing embroidery old and now has recovered.

The condition was very poor, not so much in terms of the embroidered motifs, and the conservation of supportive tissue, which was badly worn.

The supporting tissue was in very poor condition, with a distinct wear especially in the central part, where you tied the cord and the back which supports the standard to port, causing numerous lacerations.

The embroidered pieces and wire generally presented no great loss, except for external areas most exposed to friction that had lost the golden thread or crumpled in a high percentage, these losses were concentrated on the outside of the fleece, the sidesnagüilla external and the central area of ​​the drawing, which is touching the cord.Fortunately, the most delicate areas, such as brackets and a gallon of “Milanese”, were in optimal condition.

Action on the banner consisted primarily in the past to a new supporting tissue of embroidered motifs composing the piece and the enhancement embroidered on the back, recovering therefore the wealth of the old banner. The support material used was a green velvet top quality.

First, we performed a drawing of the full-scale work, to make perfectly identified the location of each of the elements that constitute it. In addition, we designed the back, like the banner that has the old, but making the necessary changes in size to square it with the current.

We proceeded to dismantle the base fabric embroidered motifs, noting its location prior to returning them each in its original place.

Following all the embroidery were cleaned using cotton swabs and a solution of ammonia and 50% demineralized water, in extreme caution in the most delicate areas, such as “Milanese” to prevent the release of the original thread.

The next step was the restoration, one by one of the most impaired in individual racks, reinstating only the damaged strands and replacing only those who were in an unrecoverable state.

After this work, fixed the embroidery on the new tissue, mounted on its corresponding frame.

As mentioned, in the back have embroidered banner following the original design, new grounds with different techniques of cardboard, razor, scaly sequins, etc.. In addition, the donuts have been replicated in black and silver so characteristic of the decoration of that badge.

The last restoration work and culminated in the inner lining and mounting the mold.

Intervention has been completed with the addition of a new bead of gold, the work of Sacred Art San Fernando, craft industry been run D. Fernando de la Poza.

A curious fact is worth noting the appearance of a document within the embroidery signed in 1973 by a seamstress named Rosa Maria Chaves Lopez, who at that time was 22, that Madonna asked wing “health and love.” Today is the grandmother of two granddaughters, still embroidering at the workshop and participated in the restoration of the banner embroidered herself 39 years ago.

It is also noteworthy that another embroidery workshop, Ana Martin, is daughter of our unforgettable brother Antonio Saez, who for so many occasions will carry the iconic logo and whose descendants are still taking it every Friday