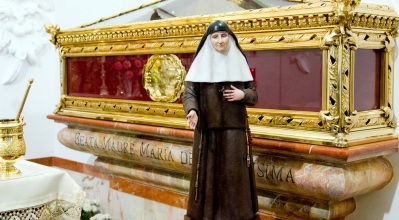 On Saturday morning, October 27, in the chapel of the Motherhouse of the Sisters of the Company of the Cross, was blessed by the image of the Blessed Mary of the Immaculate Conception, which from next thirty-first day , this month, will worship at the Basilica of Santa Maria de la Esperanza Macarena.

The blessing was performed by the Rev. Mr. D. Borrego Antonio Cobos, and Rector of the Basilica of San Gil Abad Pastor. In this simple but moving ceremony was attended by a large representation of the Brotherhood, led by D. Manuel Garcia Garcia, Big Brother, the Superior of the Motherhouse of Seville on behalf of the Sisters of the Company with such delicacy prepared and hosted the event. Also present N ª H ª D ª Ana Maria Rodriguez Married to his parents, girl on which Mother Mary of the Immaculate interceded to work a miracle that he recovered his health and this was accepted by the Congregation for the Causes of Saints to end of grant Beata status. Also attended with his family, and NHD Fernando Aguado Hernandez, author of the image.

Until the evening of October 30 the image will be exposed to the veneration of the devotees of the Blessed and Santa Angela de la Cruz, in the chapel of the Motherhouse, where lie the bodies of both venerable Sisters of the Cross.