Pilgrimage of the Messengers of Hope 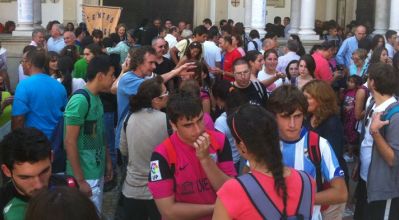 Early in the afternoon arrived at the Basilica centers and communities of the Missionaries of Hope (MIES). Like every year, filled out the traditional visit to his patron, the Virgin of Hope Macarena.

Half a century of existence this Marian congregation sees that originates the call that the priest of the Diocese of Málaga, Rev.. P. Diego Ernesto Sevilla Wilson Silver received after his first public Mass at Our Lady of Hope, on October 12, 1956. Since then the congregation, based in Malaga, has been settled in several Spanish dioceses and spreading to other countries, such as Ecuador, Paraguay and Argentina also maintains missionaries in Angola, Northern Ireland and the United States.

At dawn, from different populations of national geography, had been in Bormujos to, together, make a pilgrimage to the Basilica de la Macarena. Used in about five hours to walk the seven miles that separate the town aljarafeña macareno temple, which came after the one p.m. different centers carrying some nice badges that identified them.

In the atrium of the Basilica was waiting on behalf of the Governing Board of the Brotherhood the Counsellor Head of the Cults, NHD Santiago Alvarez Ortega, who accompanied them on the Eucharist held mass below which was presided by Rev. Fr. Mr. D. Matthew Andres Merino, general manager of MIES priest and pastor of Santa Ana and San Joaquin, and the parish of St. Francis Xavier, both of Malaga. In conclusion, the plants were able to approach the Blessed Virgin of the Rosary to kiss his hands, saying goodbye to her employer until next year. In the afternoon, after a short break to regain strength would come to the Convent of the Sisters of the Cross to venerate St. Angela de la Cruz.