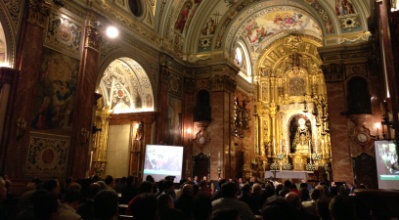 On the morning of Sunday 11 November, the council held General Ordinary Account, which developed after the Order of the Day, previously communicated to the brothers. After the initial prayers were read the minutes of the previous council which was approved by the attendees being read, then the report for the year 2011/2012. Also approved the accounts showed the Brotherhood and the budget for 2012/2013. Then Mr. Butler of Our Lady of Hope proposed, on behalf of the Board of Governors, that charges are kept in the same amount as the previous year, given the economic situation facing the country, approving the proposal.

NHD FRancisco then intervened to refer Arquillo Torres maintenance interventions for conservation, conducted our dear and sacred Images Headlines, meaning that it had no more significance than the replacement of polychrome, in places that need it and other replacement for smaller jobs. Following this intervention, the Governing Board proposed to the City Council the appointment of José Márquez Morales NHD as Honorary Director of the Polyphonic Choir of the Brotherhood, which was accepted and reciprocated with a standing ovation.

As stated the next item on the agenda, Big Brother set out in its report the unfortunate situation that our society, which has increased investment in social welfare, given the high number of brothers and devotees who come to our church in for help. He referred to the actions carried out in our Sacred Images Headlines, already reviewed by the auditor, as well as the work of restoration and recovery of the original design being carried out in the green mantle tissue, very close to its conclusion absence of any event. Also referred in his presentation, the important efforts being made by the Brotherhood to increase communication services with the Brothers, with the introduction of a new website, publication editing, in its third season, “Our Hope” and sending monthly digital newsletter which announces upcoming events and worship and celebrate that occurred since the previous issue. Emphasis made to report on the evolution and current time on the grant that the Brotherhood has received, following the judgment of the supreme tribunal confirming the favorable ruling issued by the Justice Tribune, noting that the funds allocated to the aforementioned grant can only be allocated for the purposes contemplated therein, and that the Brotherhood has taken steps to accelerate recovery.

Then explained Mr. Big Brother, that the Governing Board is working on the preparation of the commemorative events to celebrate the L Canonical Coronation Anniversary, to be held in May 2014, stating that the intention of the Board presiding, give greater prominence to it as is and aims, provided that the relevant authorizations are issued to seasonal to celebrate Mass in the Plaza of Spain, a place that is raised in memory of Macarenos. On the program of events indicated that is under preparation and will culminate when apprise through this medium, the Brothers, who invited their participation and collaboration in the same, as the extensive program aimed formalize, is only possible and can be successful, with the involvement of all.

He ended his report recalling the importance of the ongoing work of the Social Assistance, as said at the beginning of his explanation, and the necessary cooperation of all to keep pitching the great message that has been passed, it is simply to try and give hope to those who need it most.

In the words of Big Brother, who received a standing ovation concluded the regular General Cabildo Accounts 2012.