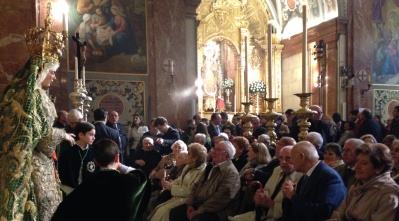 Like every year, the senior brothers of the Brotherhood have been able to attend the levee of the Virgin of Hope by volunteers Macarenos Veterans Project. This time, 48 people have been those who have participated in this moving ceremony, many of them collected by the volunteers of the project in their cars and accompanied to the Basilica. Once in the temple, Elder Brother, Manuel Garcia, I said a few words of welcome, after which they accompanied the levee of the Blessed Virgin of Hope, before she can remain for a long time sitting in chairs reserved for them. Faced Hope have lived intense minutes of silence and prayer as many of these brothers had spent years unable veterans attend this event. Later the brothers have become veterans kiss their hands and have gone home to the Hall of Brotherhood, where he started the traditional Christmas snack. A video that reviewed the history of the Brotherhood, reading an endearing story written by an acolyte of the Brotherhood, which was the older players and a performance by a choir of bell ringers, have given way to snack and moments coexistence between the veterans and volunteers of the Project. Finally, before being taken back to their homes, Big Brother has been handing them each some gifts as memories of the picnic this year.

The Macarenos Veterans Project is an initiative of the Brotherhood to make it easier for older brothers and who for various reasons can not attend worship acts and doing so with the cooperation of a large number of volunteers.