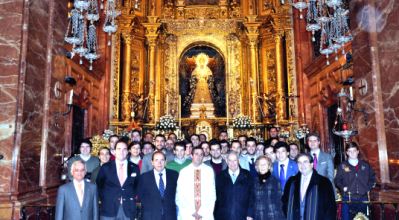 On the morning of December 29 was celebrated in the Basilica de la Esperanza Macarena the twentieth anniversary of the creation of the group of acolytes of the Brotherhood of the Macarena. The event began at thirteen and thirty hours with the celebration of Holy Eucharist was presided by our Rev. brother. Mr. Ginés González de la Bandera, giving the curious fact was part of that group of acolytes, in the early years of its creation.

Attended by the Brother, D. Manuel García García and responsible for Training and Youth, Mr. Counsellor First, D. Eladio de Leon Carrillo, N ª H ª María Isabel Gil-Delgado, who contributed so much and had to do with the cración of this group, and Queralt and NHD Jose Antonio Fernandez Cabrero, who has served as chaplain in those years that was brewing this beautiful project.

After the Mass of thanksgiving was held coexistence among all brothers, that at some point or formed part of the group of acolytes who participate in all religions of the Brotherhood and its light are pointing the way to our sacred Headlines at dawn on Friday.