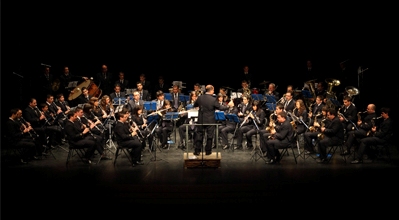 The Band of Mairena del Alcor is no record that appears in the nineteenth century between 1890 and 1900, where they were meeting a group of friends to cultivate his love of music, directed by Maestro Salazar. It is in 1929 with Director D. Jesus Carmona Rivers, where the first documents on file with the Hon. City of Mairena del Alcor of what would later Municipal Band.

On the death of this son of the people, reaches D. Rafael Fernández Alba (1901-1968) native of Alcala de Guadaira, who came to continue the work of his predecessor, he learned music with his father and brothers, after which he joined the band your local Workers. Apart from directing the Municipal Band of Mairena del Alcor almost fifteen years, also directed municipal bands like Estepa and your hometown; composer among others (Goodbye Forever, dedicated to the memory of his mother, Carmen and Ntra Poor Lady of the Angels, composed for the Brotherhood of the Negritos of Seville). With this great director grouping begins a period of development that takes you to reach the Municipal Band category, achieving great prestige throughout the province as well as in Seville, which is contracted by the City of the capital, to act in different acts of the Universal Exhibition of 1929, along with accompanying important penitential brotherhoods (The Hiniesta, San Benito, Los Gitanos) and Brotherhoods of Seville glory. Adverse circumstances led to the temporary disappearance, but in 1986 with the collaboration of HE. City Council and a group of village musicians was rebuilt with D. Enrique Rojas and D. Vicente Benlloch, as principals and teachers of the music room. In 1993 he presented to the public in the parish of Santa Maria Assunta de Mairena del Alcor, in 1995 he recorded his first album “Music of Palio” and in 2000 recorded the second, presented at the Parish of the Tabernacle of Seville Cathedral SI .

From here, D. Francisco Javier Alonso Jimenez, professor of clarinet at the Conservatory of Seville, a native of Two Sisters, learning music with his teacher D. Moron and composer Fulgencio (Calvary dedicated to Paco Palacios “The Pali” troubadour Consuelo Maria Sevilla and dedicated to the Brotherhood of Thirst), passes to take over the management, enrolling as Cultural Music Association (Municipal Band and Classroom of Music) in the National Register of Associations, recovering again the annual agreement with HE. City that existed in 1929, signed on June 16 of that year.

Since then the rise of the Municipal Band has been continuously coming to settle among the best in the entire province. Among its most significant actions are possible to emphasize the concert held on stage at the Lake of the Charterhouse in 1993, acting in the Church of the Savior of Seville for the restoration of Christ’s Passion, concert held in the auditorium of the niversity of Seville occasion of the opening of Lent 1997 in the Brotherhood of students, Munarco concerts in 1997, 1998 and 2004, performance at the Lope de Vega theater in Seville for the tribute to D. Pedro Braña, various concerts in the province through the Obra Cultural Foundation “Mount” and participation in December 2000 on the set of the film director Joseph Easter Danquart, in the town of Carmona.

Also include concerts by various districts of Mairena del Alcor, musical accompaniment on Brotherhoods most of its people, its musical accompaniment in the town of Brenes after a decade with the Brotherhood of the True Cross, the proceedings in the Parish Immaculate Conception of Seville in the cults of the Brotherhood of Thirst, directed by renowned directors of D. Pedro Morales, D. Joseph Albero, D. Fulgencio Moron, D.

Abel Moreno, D. F º Javier Gutiérrez, its revival in the Holy Week in Seville accompanying the canopy of the Brotherhood since 2002, and the musical accompaniment in the canopy of the Virgen del Rocío of the Brotherhood of Redemption of Seville, from Easter 2005, and the accompaniment with the Brotherhood of the Holy Angel Carmen in Seville in 2006. In September 2003, made his third album with Rome Productions recording studios in High Frequency of the capital, which has led him to get Giraldillo Musical 2004 Honor Award by the Course “Sevillian Topics” directed by D. Antonio Bustos.

Enhancing their participation in Lent 2007 in acts of homage to the famous director D. Pedro Gamez Laserna, in an impressive concert hall in Seville Joaquin Turina organized by the Brotherhood of Thirst, with works of the illustrious composer. In 2008 he returned to participate in this event, organized by the Brotherhood of thirst, performing another concert procession marches prestigious composers.

The Municipal Band, as seen in its progression, has a growing activity, so from 2007 include his performance in the series of concerts organized by the Museum of Arts and Traditions of Sevilla (María Luisa Park), which is in collaboration with the Friends of the Museum, with the aim of rescuing the Andalusian folk music through bands, concerts and accompanied by four Corales made in Marchena, Alcosa Park (Seville), Mairena del Alcor and Theatre Virgen de los Reyes (Sevilla).

This whole number of acts, add all routine concerts in your area (Christmas, Santa Cecilia, Lent Fair, Summer Concerts, …) concerts in Lent (Gran Teatro de Huelva, Cordoba, Seville, Malaga , Cadiz, etc.) and their outputs processions during Lent with the Association of the Miraculous Medal Parish in Garden City, his debut Cordobesa Easter Easter Sunday in 2008 accompanying the Brotherhood of the Risen and support in 2010 with the Parish of Our Association. Redemption Father Jesus and Our Lady of Hope of the nearby town of El Viso del Alcor, in addition to the various processions of Glory, Our Lady of the Abandoned Alcosa Park, El Carmen del Santo Angel, Shepherd of Capuchins, all in Sevilla, therefore working throughout the year, both in music and pop music playing brother marches, pasodobles and works great level, preserving our traditions, culture spreading wherever Andalusian musical acts.

Highlight as turning the summer of 2008, when the Cultural Association moved to its new headquarters, Civic Center Music “Antonio Machado”, where modern facilities and specialized musical work performed, both the Municipal Band with their trials as the Municipal Music Hall with their classes, which has a large number of students and teachers, overcoming the 200 students, which will nourish and improve the level of our band, being created during 2009 a children’s band, which will for future members of the Municipal Band gain experience and come much more prepared when part of the Municipal Band of Mairena del Alcor.

Finally, we would like to say that our story is the story of all those who were part of the Municipal Band, musicians fondly music spread across our land, who proudly carried the name of Mairena and his band mates that we bequeathed his teachings and were able to keep the flame alive, despite the vicissitudes of our passion “MUSIC”.