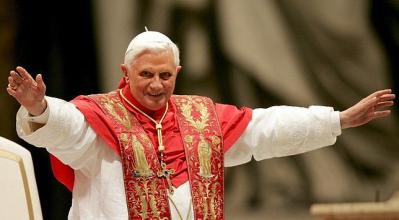 On 27 November, the Cardinal Monteiro de Castro, Major Penitentiary of the Vatican, awarded by order of SS Benedict XVI to the Brotherhood of the Macarena a Jubilee to celebrate the Fiftieth Anniversary of the Canonical Coronation of Our Lady of Hope Macarena.

This macareno Jubilee Year will begin on June 1, 2013 and end on June 1 next year, can get a plenary indulgence under the usual conditions the faithful on pilgrimage visiting during this time period the Basilica de la Macarena. The original document can be seen at this link, and its translation.

The Governing Board approved Official Cabildo held in the month of April 2011 to request the granting of this Jubilee, which were transmitted the contents of this agreement in the summer of that year to our Archbishop, Hon. and Rt. Mr. D. Juan José Asenjo Pelegrina, who own the initiative welcoming as issued to the Apostolic Penitentiary of the Holy See, offering a new show of affection and closeness to our brotherhood so again we show our appreciation, esteem and respect.

The Governing Board wishes to convey its appreciation for the grace granted to the Cardinal Brotherhood Monteiro de Castro, who has had the opportunity to visit the Basilica and pray to the soles of the Blessed Virgin of Hope in the month of May 2000 , when she served as Apostolic Nuncio to Spain.

It is known as Jubilee or Holy Year Year, the space of time in which the Holy See because most singular reward the faithful who come to the temple to which the privilege is granted. This is a great religious event and becomes a year of remission of sins and sorrows; becomes the year of reconciliation, conversion and justice, along with promoting a renewal of desire to serve God in the joy and peace with the rest of the brothers.

With the granting of the Jubilee Year, the Basilica de la Macarena deepen its vocation school that delve into the most important of the commandments of the Lord, the brotherly love, becoming promised land for all who come to her to meet God , consolidating even more as a center of pilgrimage for those who do visit his encounter with the Blessed Virgin a true testimony of Christian faith and the journey in the company of our brothers can live the grace of reconciliation and feel the joy of gratitude Jesus and who took him in her womb, the Blessed Virgin Mary.

This Jubilee allow the light that radiates from the Basilica de la Macarena reach even further and become entrenched as a beacon of true faith, to protect those who want to sail under their protection and can reach port anchor clinging to hope to strengthen their testimonies as good Christians.