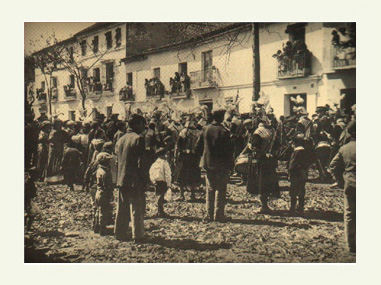 The history of the Band of the Centuria Romana of La Hermandad de la Macarena is indissolubly linked to that of the Centuria Romana Macarena itself: the popular “armaos” of La Macarena. The first documentary evidence of the existence of “armaos” (from “armados”, meaning “armed individuals”), a group representing Pontius Pilate’s Praetorian guard and accompanying the paso (processional float) of El Señor de la Sentencia in the Easter procession, is to be found in 1658, coinciding with the Brotherhood’s first plans to incorporate this episode from the Gospels as an element of their devotion to this titular figure. At first the group was made up of around twenty five men from the Macarena quarter. In processions, they did not walk just behind the paso of La Sentencia, but formed part of its accompanying cortege. The Band of the Centuria, which first appeared at this time, comprised just a handful of musicians who heralded the arrival of the paso representing Christ’s unjust sentencing to death with their heartrending, wailing music.

From the band’s creation until 1897, which was when the Centuria Romana of La Hermandad de la Macarena was last reorganized, its history has been characterised by periods of splendour and stability punctuated by other periods in which the Centuria Romana was disbanded due to discrepancies with the Junta de Gobierno (the Brotherhood’s governing body), decrees issued by the church authorities – for example, the elimination of all “armao” companies in 1766 – or conflicts within the group itself.

The existence of a “musical” component in the formation is corroborated by the Rules approved by the Brotherhood on 5th July 1865, which set out the procedures for the “Admission of Brothers and the Conservation of their status as “Armados” in the Cofradía de la Sentencia de Nuestro Señor Jesucristo y María Santísima de la Esperanza (Procession of the Death Sentence of Our Lord Jesus Christ and Most Holy Mary of Hope) in this Parish of San Gil” and which also obliged the members of the Centuria to pay for the musicians’ uniforms and to satisfy their fees for playing in the procession. At this time, the Centuria still walked in front of the paso of El Señor de la Sentencia bearing the Senatus. The appearance of the term “music” in the Rules confirms the idea that at this time there already existed an organized band with a sufficiently varied repertoire.

One of the group’s landmark events took place on Good Friday, 21st April 1905, once the Brotherhood had completed its procession in the Parish Church of San Gil. King Alfonso XIII invited the Centuria Macarena to the Reales Alcazares, his residence during the whole of Easter Week. The Centuria was received in the Patio de la Montería by the Royal Guard, which was drawn up in full military dress uniform, and reviewed by the King, who personally greeted each of its members before inviting them to a banquet. Another important event which indicates the existence of a fully consolidated band is recorded in the Brotherhood’s archives as having taken place in March, 1913. It was then that Joyería Reyes made the gold crown of La Santísima Virgen de la Esperanza. The people of Seville, and in particular the traders in the market of La Encarnación, displayed outstanding generosity in offering to contribute towards the cost of the crown with gold coins known as “alfonsinas” and “isabelinas”, to ensure that the final result was as rich and magnificent as possible. When the crown was finished it was exhibited in the jewellers’ shop window, and the band of the “armaos” formed up there to play a number of processional marches in what was their earliest known concert. 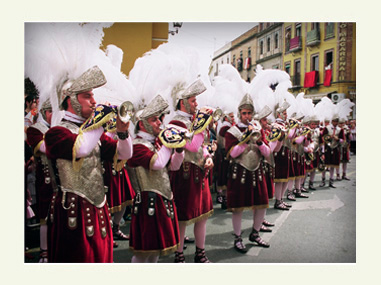 The band’s repertoire of marches at that time was at best scanty, and derived mainly from military marches. By the 1930s, it included pieces such as “Aída”, “La Reina” and “La Corte del Faraón”. These marches were based on simple harmonization structured around natural tones and requintos (higher and lower pitched notes). One particularly interesting aspect is the uniform worn by the Band of La Centuria in this period when it was hired to play for other brotherhoods: navy blue jacket and trousers with green side-stripes and round, green-topped caps. A few years later this uniform was changed, the blue being replaced by the grey which the Band has now been wearing for several decades. Since its last reorganization the Band of the Centuria Macarena has had the good fortune to be led by a series of outstanding figures who have devoted all their energy to making sure that the group’s legendary sound continues to be heard during Semana Santa in Seville. When the group was reorganized in 1897, Enrique Senra took charge of the band: those were the days when the Royal March was played for Manuel Torres in the middle of Calle Sierpes following his saeta (sung prayer) to El Señor de la Sentencia, and for Joselito “El Gallo” as he came down the steps outside his home in the Alameda de Hercules wearing the robes of a nazareno macareno (participant in the Macarena procession). Enrique Senra was succeeded as head of the Band by Helidoro Pulidoro, Enrique Soria, Manuel Ruiz Navas, Diego Romero, Antonio Rodríguez Patón, Francisco Domínguez Gaona, José Téllez Díaz, Rafael Calderón, Rafael Trigo, Manuel Arellar and, since 1993, the present director José Hidalgo López.

It has also performed in countless concerts, not only in its “home” venue of the Basilica of Santa María de la Esperanza Macarena but also in other venues in Seville and elsewhere. In Seville, apart from the canonical seats of the different brotherhoods it has accompanied in the Easter procession, it has performed in other temples corresponding to brotherhoods like Los Negritos, El Museo, Los Estudiantes and El Silencio, whose processions are not accompanied by music, or are accompanied only by chapel music. It also plays its marches each year on Easter Thursday, when the whole Centuria pays its traditional visit to the Basilica of El Señor del Gran Poder, the “Lord of Seville”.

The Band is a habitual participant in Glory and Holy Eucharist processions. Special mention should be made of its participation in the Cabalgata de los Reyes Magos (Procession of the Magi) organized each year by the Ateneo in Seville. From 1935 to 2004 the band did not miss one of these processions.

Today, the distinctive bugle and drum style of the Band of the Centuria Romana Macarena perpetuates the classic sound which forever brings to mind the Semana Santa processions of yesteryear, a style first introduced in Seville by the now disappeared Bugle and Drum Band of the Armed Police. 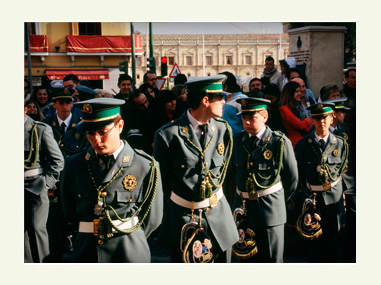 The Band has also recorded several albums. The first was recorded in the Teatro Lope de Vega in 1967 for the Pax label. The record sleeve showed a photograph of the armaos during the Madrugada (early morning procession) on Good Friday. The Band then recorded three albums for Ediciones Senador, in 1982, 1989 and 1991 respectively. In 1991 it recorded the soundtrack for Manuel Gutiérrez Aragón’s film “Semana Santa”. The soundtrack appeared on a new album released by Juan Lebrón Producciones in 1995. Later, in 1996, 2000, 2005 and 2007, the Band recorded new material for Ediciones Pasarela. The most recent albums, entitled “Evocación” (I and II), were produced by Alberto Escámez and released in 2009 and 2010.

The Band’s long history of success, its performances and its loyalty to its own distinctive style have been recognised on numerous occasions. The awards it has received include the “Antena de Oro”, awarded by Radio Cadena Española in 1982; the First Prize for Bugle and Drum Bands, by Radio Nacional de España in 1984; the “Nazareno de Plata”, by the Consejo General de Hermandades y Cofradías (General Council of Religious Brotherhoods and Confraternities) in 1986; and the “Saeta de Oro”, by the radio programme “Saeta” broadcast by COPE radio station.

The Band, then, is an institution without paragon, an example of the pure essence of Seville. For everything that it represents and symbolises, it will forever be much more than just a simple bugle and drum ensemble.