From the turn of the 20TH century to the present day 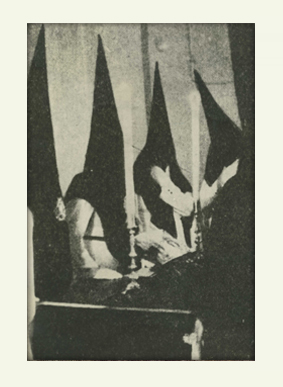 On 24th March 1903 the Brotherhood signed a concordat with La Hermandad de Nuestro Padre Jesús del Gran Poder (Brotherhood of Our Father Jesus of the Great Power). The agreement, brokered by Cardinal Spinola, established a bond of fraternity between the two institutions which has lasted ever since.

On 14th May 1904 the Parish Church of San Gil was visited by H.M. King Alfonso XIII. The King arrived at half past ten in the morning accompanied by the Prime Minister Antonio Maura, and was received by the Hermano Mayor and the entire Governing Committee. He spent a few moments praying before the paso (processional float) of the Holy Virgin and then walked around the paso admiring its artwork. He then swore allegiance to the Rules of the Brotherhood and was officially named Hermano Mayor Honorario (Honorary Senior Brother).

On 27th May 1923 the Arch of La Macarena was dedicated to La Virgen de la Esperanza in recognition of the intense devotion inspired by this representation of the Virgin. A magnificent ceramic retable by Rodríguez y Pérez de Tudela was unveiled on the Arch itself. It was six o’clock in the afternoon and the Church of San Gil was packed with distinguished figures, including H.R.H. the Infanta Doña Luisa accompanied by the infantes. A procession was organized through the Macarena quarter, one of those taking part being Archbishop Illundáin. 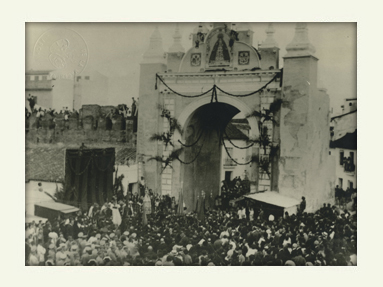 A stand had been set up near the Arch to seat Their Royal Highnesses, the Deputy Mayor, the Chief Admiral and other eminent figures, who were waiting for the procession when it arrived. To the strains of the Royal March, the Infanta Esperanza de Borbón unveiled the retable, and this was then blessed by the Archbishop, who was clad in full pontifical attire. The retable was presented to the city on the Brotherhood’s behalf in a fine speech by Brotherhood member and Royal Chaplain José Sebastián y Bandarán, who urged the city’s representative to safeguard and defend it. The Deputy Mayor, Mr. Bago Quintanilla, accepted the valuable gift, promising that the City would take good care of the retable and expressing his pride at being a member of the Royal Brotherhood. The ceremony ended with a few heartfelt words from the Archbishop. 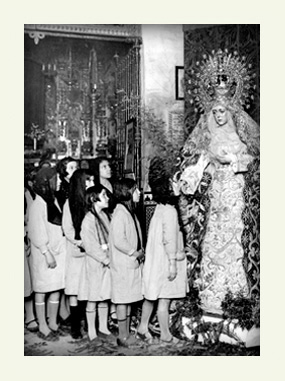 1925 saw the introduction of the Besamanos (handkissing ceremony) for La Virgen de La Esperanza, coinciding with her feast day. The whole Macarena quarter lined up to kiss the Virgin’s hand amid remarkable scenes of fervour and enthusiasm. It is estimated that more than ten thousand people attended the Besamanos ceremony. One positive aspect was that the crowd drew together a wide variety of social classes, from H.R.H. Doña Esperanza de Borbón to the poorest, most humble inhabitants of La Macarena. At this time, the Brotherhood had over a thousand members.

On 1st February 1929 an event took place that was unusual in the history of the Brotherhood. When the Hermano Mayor Felipe Pachón Rojas died, the intention was that his successor, Leoncio Martínez de Bourio Sánchez, should be appointed Hermano Mayor in the next Extraordinary Assembly of the Junta de Gobierno. Martínez de Bourio Sánchez had been put forward by the Archbishop, but he had only been admitted as a member of the Brotherhood on the previous 18th January. The macarenos were so unhappy about this decision that the new appointment never took place: women from the quarter burst noisily into the Chapter Room, pushing and jostling Don Leoncio and throwing buckets of melted lard and indigo over his head. Leoncio refused to take possession of his new post. Visibly frightened, he went out onto the balcony of the camerín room and announced his resignation. The Chapter Room and the access stairs had to be cleared by the police. In view of what had happened, several members of the Junta de Gobierno went with the vicar to see the Cardinal, whom they found with Mr. Martínez. The cardinal reiterated his order that his previous instructions be carried out, although in the end this was not done. 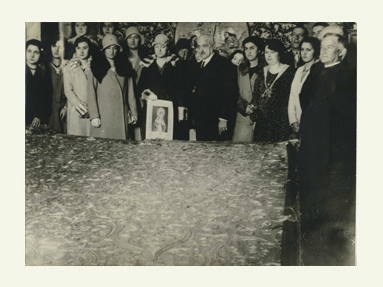 The following year H.R.H. Doña Esperanza de Borbón made a written plea to the macarenos, the Sevillians and the Spanish people in general that they might contribute towards the cost of the new lamé mantle then being made by Juan Manuel Rodríguez Ojeda. The first to subscribe was H.M. King Alfonso XIII.

In 1933 the traditional Saturday services dedicated to La Santísima Virgen de la Esperanza were reintroduced, as had been decided on 17th October 1932. 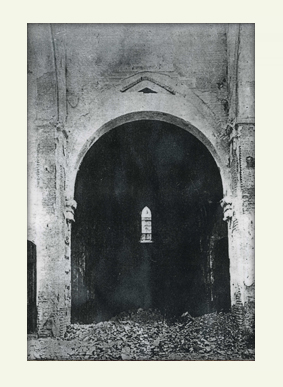 In the early morning of 18th July 1936 the Parish Church of San Gil Abad and the Chapel belonging to the Brotherhood were deliberately set on fire. By twelve o’clock at night, after a heavy exchange of gunfire with lots of shouting, running and fighting, smoke could be seen pouring from all parts of the Church of San Gil. It was known that the arsonists were heading next towards the building in which the pasos were kept, opposite the church, but when they were seen by the neighbours from the balconies they decided not to vandalise the images, pasos and objects stored there. 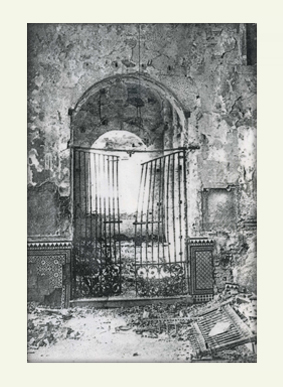 The images of El Señor de la Sentencia and Nuestra Señora del Rosario were placed in the storehouse opposite San Gil. La Virgen de la Esperanza was taken to the home of one of the Brotherhood members. In October that same year, the Brotherhood moved to the Church of La Anunciación. 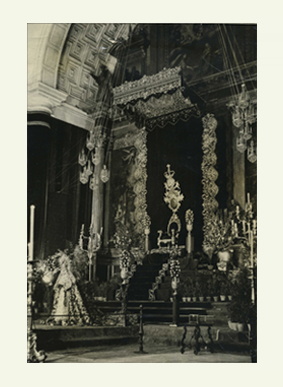 In April 1938 the Brotherhood began to publish a monthly bulletin entitled “Esperanza Nuestra” (“Our Hope”) for distribution free of charge among its members, and in 1944 it set up the “Ropero de Nuestra Señora de la Esperanza” (the “Our Lady of Hope Cloakroom”) as a vehicle through which to provide social aid.

On 19th march 1949 the images were moved from the Parish Church of San Gil, to which the Brotherhood had returned after several years at the Church of La Anunciación, to the new headquarters in the Church of La Macarena. In time this new temple would rise in status to become a Minor Basilica. 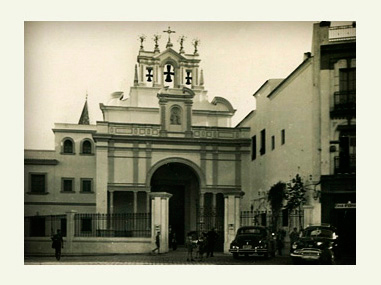 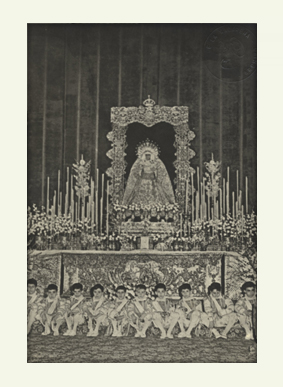 On 24th October 1976 the paso of La Virgen del Rosario was carried for the first time by non-professional costaleros (float-bearers), members of the Brotherhood., under the orders of the capataz (supervisor) Salvador Dorado Vázquez. It was a complete success. Volunteers also later bore the pasos of La Sentencia and la Virgen de la Esperanza. 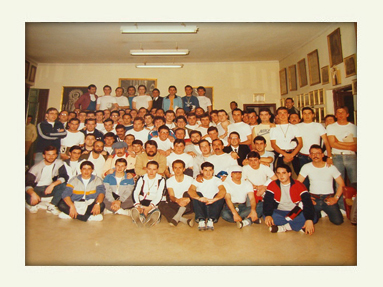 During the Universal Exposition held in Seville in 1992 (EXPO 92) the Basilica of Santa María de la Esperanza Macarena housed the Seville Pavilion. The corresponding agreement was signed by the Hermano Mayor of La Macarena, José Luis de Pablo-Romero y Cámara, by the Commissar for Seville, Jesús Aguirre, Duke of Alba, and by the Mayor of Seville, Manuel del Valle Arévalo.

1995 saw the celebration of the IV Centenary of the Brotherhood’s Foundation. 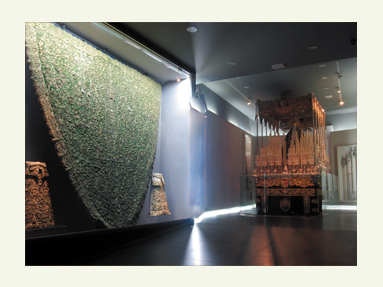 October 2009 saw the opening of the new museum space for the Treasure of La Macarena, an eminently contemporary architectural and exhibitive design which not only allows the Brotherhood’s rich heritage to be effectively displayed and interpreted but also ensures that it is conserved in appropriate manner. 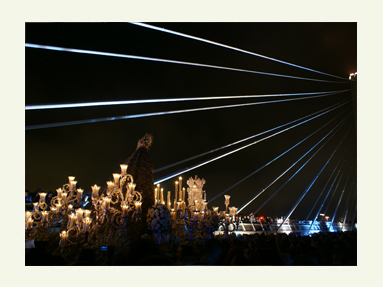 On 31st May 1790 the Real Consejo de Castilla submitted the Rules drafted by La Hermandad del Rosario, based in the Church of San Gil, to the Real Audiencia in Seville to set in motion the process of approval. The draft, however, had been slightly altered, one of the changes being that the Brotherhood could not oppose amalgamation with other brotherhoods if this were deemed necessary to comply with the regulatory reorganization of religious brotherhoods in the Parish of San Gil. 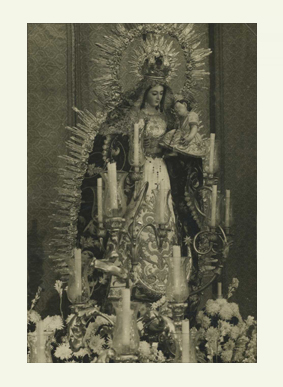 On 24th July the Crown Attorney returned a favourable ruling, stating that: “It is widely acknowledged that the continued existence of the aforementioned body where devotion to Nuestra Señora del Rosario is very fervent is of great use”. On 15th October the Consejo de Castilla wrote to the Regent of the Real Audiencia of Seville asking “whether there existed in the Parish Church of San Gil a Sacramental Brotherhood or any brotherhood to which that of the Rosary might be united and the terms under which such a union could be verified”. On 17th March 1791 the attorney of the Audiencia of Seville reported that: “in the Parish of San Gil there is a Sacramental Brotherhood called the , with its Rules approved. There are also another three deserving of the aforementioned approval, one of these being that of Nuestra Señora del Rosario, which is the one now requesting approval from the Consejo, and the other two being that of La Sentencia and that of Nuestra Señora de Belén. With regard to the union of the three aforementioned brotherhoods, the Attorney proposes that it may be necessary to suspend one or more of the same. In the meantime the aforesaid Hermandad del Rosario should be approved”.

On 24th March, the Audiencia requested that the respective Hermanos Mayores of La Sentencia (the Death Sentence) and Nuestra Señora de Belén (Our Lady of Bethlehem) submit their Rules. They both replied that they could not hand over their Rules because these had been collected several years earlier when the Order of the Royal Agreement had been issued. In August of the same year the Hermano Mayor of La Esperanza and the Mayordomo (chief steward) of El Rosario, fearing the disbandment of their brotherhoods and aware that the Real Consejo wished to have only two brotherhoods dedicated to different figures in each Parish, sent a letter to the Real Audiencia arguing in favour of their union. Their reasoning was that: “they are in the same Church and many of the members of one Brotherhood are also members of the other, and this good correspondence will be made firmer by union; but this might be done maintaining each brotherhood’s independent handling of its own income and alms”. 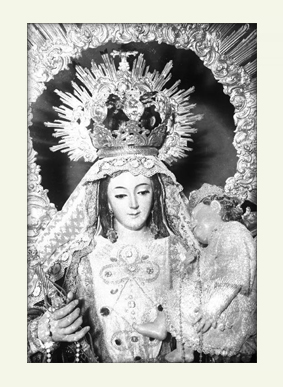 On 8th October the Crown Attorney replied: “having considered the representations submitted, we deem the union of La Hermandad del Rosario and the Sacramental Brotherhood inconvenient and consider that the Hermandad del Rosario should unite with the brotherhoods of La Esperanza and Belén, an outcome easier to arrange insofar that the sole objective is devotion to Our Lady”. He went on: “it would be desirable to reform several chapters of both sets of Rules to establish a Mayordomo for each of the brotherhoods, who would administer their assets separately although always under the supervision of one Hermano Mayor”.

Finally, on 22nd October, a Royal Agreement was made known, approving the union of the two brotherhoods and advising them to modify and use the already authorized Rules of El Rosario. The Rules of La Hermandad del Rosario that had already been approved by the Real y Supremo Consejo de Castilla were therefore taken as the basis for the new Charter. On 21st March 1792 the Royal Council authorized the union of the two brotherhoods, but granted priority status to La Hermandad del Rosario de San Gil because that was the institution which had first obtained approval for its Rules from the aforementioned Council. From then on two mayordomos and two secretaries could be appointed, one for each brotherhood, and the new Brotherhood’s official name would be LA HERMANDAD DE NUESTRA SEÑORA DEL ROSARIO, NTRO. PADRE JESÚS DE LA SENTENCIA Y MARÍA SANTÍSIMA DE LA ESPERANZA” (“Brotherhood of Our Lady of the Rosary, Our Father Jesus Christ of the Death Sentence and Most Holy Mary of Hope”). The new Rules were duly approved on 31st January 1793, omitting the reference to the Good Friday procession.