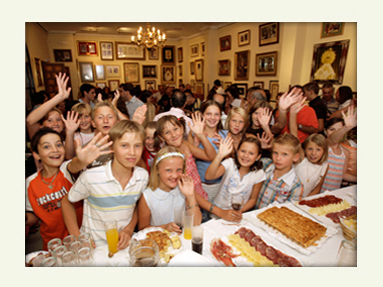 In 1986 one of the biggest non-natural disasters the Earth has ever seen occurred in the Ukrainian city of Chernobyl. A leakage from the main reactor in the city’s nuclear power plant was followed by an explosion and the leakage of a cloud of toxic gases which rapidly spread through the airspace of neighbouring countries. The negative effects of this nuclear disaster were felt especially in the Republic of Belarus, which received 70% of the toxic matter carried by the cloud. The amount of radioactivity released was four hundred times greater than that produced by the atom bombs dropped on Hiroshima and Nagasaki in 1945. The catastrophe devastated fields, made whole cities uninhabitable and caused around thirty thousand deaths over the following years. In all, more than ten million people were directly affected. The Brotherhood launched this programme in 2003, with the aim of alleviating the disastrous effects the 1986 Chernobyl nuclear power plant accident has had on the population of Belarus.

A programme was therefore designed and implemented to move the children who still live in Belarus and are suffering the effects of the Chernobyl disaster. A period of time spent living outside the area affected by the radioactivity is immensely beneficial for Belarus’ children. In fact the World Health Organization has estimated that for each month these children spend in Spain enjoying sun, fresh air and uncontaminated food and drink their life expectancy increases by between one and a half and two years. When they return to their country their radioactivity levels have dropped to zero.

A programme was therefore designed and implemented to move the children who still live in Belarus and are suffering the effects of the Chernobyl disaster. A period of time spent living outside the area affected by the radioactivity is immensely beneficial for Belarus’ children. In fact the World Health Organization has estimated that for each month these children spend in Spain enjoying sun, fresh air and uncontaminated food and drink their life expectancy increases by between one and a half and two years. When they return to their country their radioactivity levels have dropped to zero.

Aware of this situation, in 2003 La Hermandad de la Macarena implemented a personal Holiday Programme whereby Belarusian children would be hosted by Sevillian families: by the families of La Macarena. The initiative was first proposed by the Brotherhood’s Youth Group. During their stay in Seville, the children are provided with board and lodging and are fully looked after by the host families.

The Brotherhood welcomed its first group of Belarusian children in 2004. We have been able to implement this initiative thanks to the generosity of those willing to collaborate in such a beautiful project, although it should be pointed out that they are really merely following the dictates of our Christian conscience under the loving protection La Santísima Virgen de la Esperanza.

Each group is made up of twenty five children between the ages of seven and eighteen. They are supported psychologically and morally by a bilingual native Belarusian monitor who accompanies them throughout their forty two day stay in Seville between the end of June and the middle of August.

A series of group activities are organized during the stay to facilitate their own relationships with their compatriots. Their integration in the host families is generally extraordinary, but it is important that they should not lose contact with one another and forget their origins. The activities are a way of allowing them to speak in their native language, while at the same time broadening their outlook and providing entertainment and education.

The children’s return to their homes is not in the least traumatic; it must be remembered that, like all children, they have their own families waiting for them and eager to see them again. The time spent in Spain is essentially a holiday, but because it takes them away from the dangerous radioactivity which still contaminates their homeland its effects are enormously beneficial for the children’s health. 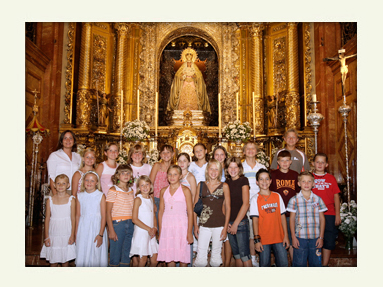 The project, however, does not end with the departure of the children. The host families stay in touch with both the children and their families, creating marvellous bonds of friendship and solidarity.

The success of the Holiday Programme is the result of an arduous management process and a huge economic effort, the main aspects of which are briefly outlined below:

– The most time consuming task is that of applying for and obtaining all the necessary documentation. The application must be submitted to the Ministry of Social Affairs and to the Spanish Government Delegation in Andalusia. When it has been approved by these organisms it is passed on to AIBS, a Belarusian agency with which we have signed a Collaboration Agreement and which presents the application to the Belarusian authorities so that passports and permits may be issued.

– We then notify the Department of Equality and Social Welfare of the Andalusian Regional Government, which has to authorize the hosting of the children, the local councils in the places where the children are going to stay and Social Security, to cover any possible emergencies.

– A fully comprehensive insurance policy, with coverage throughout Spain, has to be taken out for the twenty five children and the monitor.

– Transport has to be arranged for each child from their place of residence to the capital of Belarus, Minsk, and then on to Seville and back again by charter flight. All group travel and group excursions during the stay in Spain must also be arranged.

– Wage, board and lodging for the monitor.

All these expenses are met by the Brotherhood’s Social Aid organization. Since this project could not be allowed to constitute an obstacle to the Brotherhood’s normal activities, the Brotherhood decided to reintroduce the Fiestas de La Macarena, a festive event which had not taken place for around a hundred years. All revenue from the event is passed on to the Social Aid office to help pay for initiatives such as this Holiday Programme.

With this beautiful objective always in mind, and thanks to the collaboration of a dedicated, committed group of our members who pay for food and clothing and cooperate in all the activities that are organized to make the children’s stay in Seville as enjoyable and beneficial for their health as possible, La Hermandad de La Macarena thus helps to build a better world and to bring abundant HOPE to those most in need of it.