In 1936 Teresa Díaz donated land to La Hermandad de la Macarena as a site for the construction of a chapel. The architect Aurelio Gómez Millán was commissioned to produce a preliminary design project, and construction work was authorized to begin in 1938, when La Hermandad acquired more land adjacent to the initial site. In 1941 Cardinal Segura laid the first stone of the new Church of La Macarena in a ceremony attended by Seville’s civil and military authorities and marked by the presence of the image of the Holy Virgin, which had been brought in procession from the Church of La Asunción for the occasion. 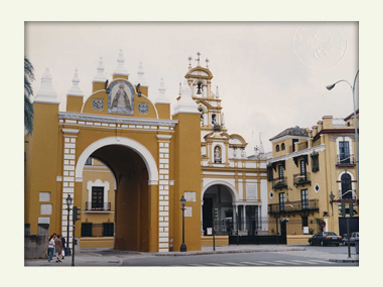 The new church was officially blessed on 18th March 1949. It occupies a total area of 1,239 square metres, of which 1,048 correspond to the building itself and the rest to the entrance courtyard at Calle Bécquer , Nº 1.

The Basilica, which comprises a nave 21 metres long and 11 metres wide, is accessed through an atrium. Its presbytery is 7 metres wide and 8 metres deep, and houses the main altarpiece with La Santísima Virgen de la Esperanza Macarena occupying an embedded chamber known as the camarín. On the right and left hand sides there are four chapels, each four metres deep, dedicated to the titular images of El Señor de la Sentencia and Nuestra Señora del Santo Rosario and to the altars of El Cristo de la Salvación and La Hispanidad. 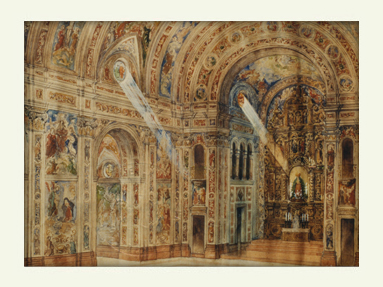 In 1965 Canon Francisco Gil Delgado announced to La Hermandad that H.E. Cardinal Bueno Monreal had received notification from the Holy See in Rome that, pending its consecration and the completion of the necessary paperwork, the temple would in due course be granted the status of Minor Basilica.

The ceiling vaults of the Basilica were decorated by the painter Rafael Rodrígues Hernández, an artist of acknowledged expertise and proven experience, between 1983 and 1993.

In 1991 a series of reforms were carried out. One of these was the remodelling of the bell tower. An extra body was added with one single opening for a new bell, flanked by pyramidal pinnacles similar to those which already existed. The sides of the new section of the tower were embellished with rectilinear brickwork scrolling. The lily vases made by Orfebrería Delgado López were also replaced, and a bronze crown was fitted. The crown was a replica of the Gold Crown of La Virgen de la Esperanza, which had been crafted by the same workshop. 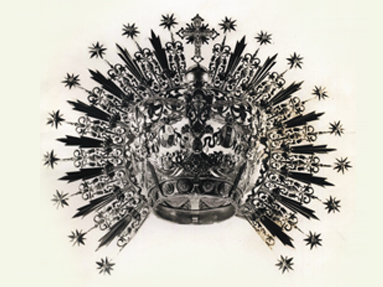 On 17th February 1963 H.H. Pope John XXIII issued a Papal Brief granting the Canonical Coronation of La Santísima Virgen de la Esperanza Macarena. On 16th February the Vatican had received the three volumes which made up the official request for this Canonical Coronation, and the following day these were presented to the Chapter and unanimously approved.

PAPAL BULL FOR THE CORONATION OF
NUESTRA SEÑORA DE LA ESPERANZA MACARENA
PAULO MARELLA, CARDINAL-PRESBYTER OF THE
HOLY ROMAN CHURCH,
CARDINAL PRIEST OF SANT’ANDREA DELLA FRATTE,
ARCHPRIEST OF SAINT PETER’S
BASILICA IN ROME,
PREFECT OF THE SACRED CONGREGATION OF
THE FABRIC OF SAINT PETER’S BASILICA
to His Eminence JOSÉ MARÍA, CARDINAL BUENO Y MONREAL,
Archbishop of Seville, may THE LORD grant you health.

From the letters you have sent to our Council, which has the privilege of crowning sacred effigies of the Mother of God well known for the high quality of their art or the depth of the devotion they inspire, we have joyfully learnt that for some time now the Blessed Virgen Mary denominated MACARENA has been the object of exquisite devotion in the Church of a noble, time-honoured Brotherhood in the City of Seville Aware of the long history and intensity of this devotion to the Image of the Blessed Virgin Mary, and of the large numbers of believers who hold it in veneration, we who have always done our utmost to promote and defend the honour of the Mother of God strongly desire that your wish, that of your people and the promises that have been made to crown the Head of the Blessed Virgin Mary with a crown of gold be granted and satisfied. Today, jointly with our Council, and legitimately assembled in the chapter room, by unanimous agreement, we have therefore decreed and ordered that the aforementioned image of the Mother of God may be solemnly and ceremoniously crowned in our name with a precious crown of gold. To carry out the coronation, we grant you full discretion that the ceremony be performed by you yourself or, if you deem it appropriate, by another suitably qualified person appointed by You to that effect.

Given in Rome, at St. Peter’s, on the 17th day of February in the year 1963, the FIFTH year of the Pontificate of John XXIII.

One result of the authorization for the Canonical Coronation of La Santísima Virgen de la Esperanza was the creation of the Brotherhood’s Social Aid section, an organization run by an official from the Brotherhood’s Junta de Gobierno and financed by an annual allocation. 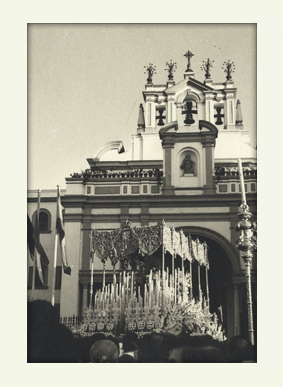 At half past seven on the evening of 27th May 1964 the paso de palio of La Santísima Virgen set out in procession for the Cathedral, where the preparatory ceremonies for the Canonical Coronation were to take place. 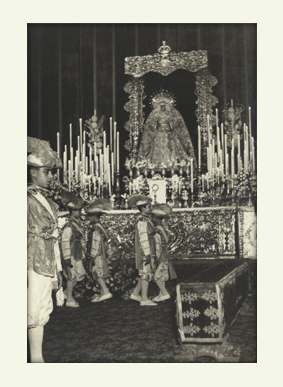 After the preparatory Triduum held in the Cathedral, on 31st May there was a pontifical ceremony presided by H.E. Dr. José María Bueno Monreal, Cardinal Archbishop of Seville. The ceremony included performances by Los Seises and the Escolanía “Virgen de los Reyes” choir, directed by Mr. Urcelay. Mozart’s Coronation Mass was performed by the Orquesta Bética de Cámara (Betica Chamber Orchestra) and the Agrupación Coral de Sevilla (Seville Choir Group), directed by Luis Izquierdo. The ceremony was attended by H.E. the Head of State and by several members of the Spanish Government.

To celebrate the Canonical Coronation, the paso of La Santísima Virgen made its first appearance with its gold netting canopy. This was a repeat of the 1942 canopy but its decorative relief and the Coronation mantle had been embellished to a design by Fernando Marmolejo Camargo. All the embroidery work was done at the Sobrinos de Caro embroidery shop. The sponsors at the ceremony were the Religious Community of Las Hermanitas de la Cruz and the Mayor of Seville, José Hernández Díaz, representing the City. 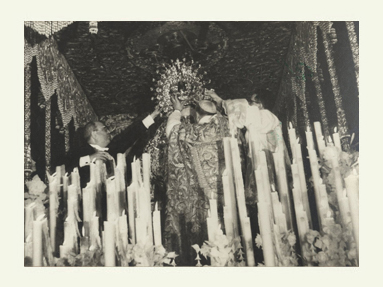 Those present included the Archbishop of Catania (Italy); the Archbishop of Zaragoza, Dr. Cantero, Monsignor Añoveros from Cadiz; Monsignor Cirarda, Auxiliary Bishop of Seville; Abbot Mitrado from the Monastery of Poblet and Monsignor Altabellay, the Canon of St. Peter’s Basilica in Rome, acting as Prothonotary Apostolic. The places of honour were occupied by Their Royal Highnesses Doña Esperanza de Borbón y Orleáns and Princess Anne of France, the daughter of the Count of Paris.
The ceremony was scheduled to be held in the Plaza de España, where Spain’s state television company Televisión Española had set up a large scale operation to broadcast it live throughout Spain, but this was not possible due to a heavy downpour of rain just when everyone was about to set out for the Plaza de España early that morning. The Coronation finally took place inside the Cathedral, at the door known as the Puerta de la Concepción. The image of the Virgin was taken back to the church of La Macarena on 3rd June.