In nineteen seventy two a group of members of the Cofradía de los Estudiantes organized themselves into a team of volunteer costaleros (float-carriers in Spain’s Easter processions) in order to carry the paso (processional float) of El Santísimo Cristo de la Buena Muerte in the Easter procession the following year. This was the beginning of a movement which was to spread to many of Seville’s other brotherhoods within a very short period of time. 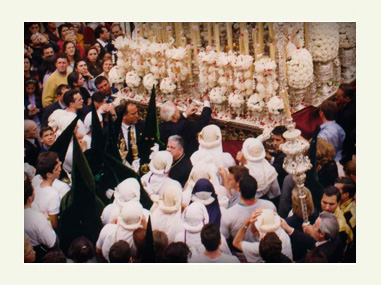 The idea of volunteer costaleros took root in La Hermandad de La Macarena and a group of young macarenos obtained support from of part of the Junta del Gobierno (the Brotherhood’s governing body), then chaired by Eduardo Miura Fernández, for a plan to form the Brotherhood’s first voluntary team and carry the paso of Nuestra Señora del Santo Rosario in the procession to take place on the twenty fourth of October, nineteen seventy six. The capataz (supervisor) in charge of the paso on that occasion was Salvador Dorado Vázquez, who, curiously enough, resigned as the Brotherhood’s capataz just two days later.

The success of that first procession justified the confidence placed in these youngsters by the Junta de Gobierno and led to the creation of the first ever team of volunteer “costaleros Hermanos” in La Hermandad de La Macarena. By now the position of Hermano Mayor (Senior Brother) was occupied by José González Reina. The new team of costaleros made its debut carrying the paso of Nuestro Padre Jesús de la Sentencia in the Madrugada (early morning procession) of Good Friday, the eighth of April, nineteen seventy seven, after months of practice. The newly appointed capataz was Brotherhood member Luis de León Vázquez, his assistants being fellow member Vicente Batelli López and Alejandro Ollero Tassara. The members of this first volunteer team were: 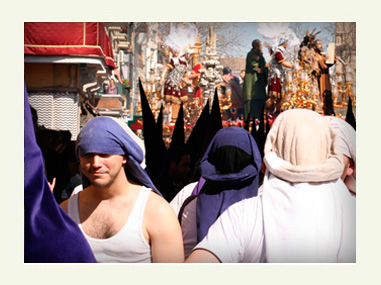 In the procession of nineteen seventy eight both of the Macarena pasos were carried by volunteer teams of Brotherhood members. The paso bearing the image of Christ was directed by Alejandro Ollero Tassara, aided by Brotherhood member Miguel Loreto Bejarano, and that of the Virgin by Brotherhood member Luis de León Vázquez. The new silver llamador (knocker) on the paso of El Señor de la Sentencia, made by the silversmith S. Manuel Seco Velasco, was donated by the costaleros who carried that paso following a collection among the members of the team.

In nineteen eighty, Alejandro Ollero Tassara was relieved as capataz of the paso bearing Christ by Brotherhood member Miguel Loreto Bejarano. In time Loreto Bejarano was to develop the style which would become characteristic of our Brotherhood’s processions, endowing the pasos with a form of movement which has survived to the present and which soon began to be known as the “estilo macareno”(“Macarena style”).

In nineteen eighty, Alejandro Ollero Tassara was relieved as capataz of the paso bearing Christ by Brotherhood member Miguel Loreto Bejarano. In time Loreto Bejarano was to develop the style which would become characteristic of our Brotherhood’s processions, endowing the pasos with a form of movement which has survived to the present and which soon began to be known as the “estilo macareno”(“Macarena style”).

In twenty eleven Miguel Loreto Bejarano decided to retire as capataz of El Señor de la Sentencia, after having guided this titular figure’s loving gaze through the streets of Seville for thirty three years.

The team of costaleros of La Hermandad de la Macarena is a group united by their passion and love for their sacred titular figures, and this has produced some extraordinary experiences and intensely moving moments beneath the pasos. The costaleros have shared many precious moments, including special processions such as those of the XXV Anniversary of the Canonical Coronation, the IV Centenary of the Founding of the Brotherhood and, more recently, the procession to the altar where Mother María de la Purísima was beatified. The costaleros are present throughout the year and have come to form an integral part of the Brotherhood, taking part in the initiatives launched by the Junta de Gobierno, meeting on the first Thursday of each month to recall and relish their experiences and strengthen the bonds of friendship generated beneath the pasos as they share their exertion with El Señor de la Sentencia, and spreading the great gift of “La Esperanza” – “Hope” – in the streets of Seville each year in the Madrugada of Good Friday.