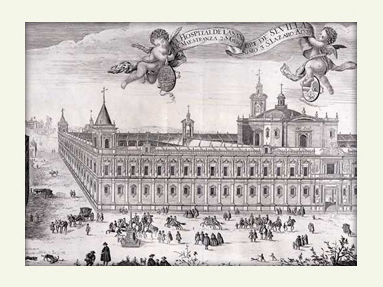 Diego Ortiz de Zúñiga describes in his Anales how in 1593 Fray Bernardo de la Cruz, “illustrious in both example and virtues”, arrived in Seville accompanied by other monks to found a collegiate church in the city in “some large houses” in the parish of Omnium Sanctorum. The premises had been ceded for that purpose by Nicolao Triarchi, a wealthy Greek residing in Seville and “as a good, patriotic Greek, a devotee of that great Greek figure Saint Basil”.

Ortiz de Zúñiga published his book in 1677, but he must have been mistaken about exactly when the Order was established in Seville and also about the reasons why, because we now have documentary evidence that Basilian monks had arrived in the city at least thirty years earlier.

He was right, however, about the importance of the role played by Fray Bernardo (or Hernando) de la Cruz. The friar’s zeal in founding the convent in Seville and attending the sick in the Hospital de la Sangre (Hospital of the Blood) was to prove decisive both for the religious Order itself and for the creation and organization of several Sevillian religious brotherhoods, one of which was La Macarena.

Following the Order’s recognition in Spain as a religious institution, Hernando de la Cruz had been actively involved in the founding of a number of the its establishments in Andalusia. The principal centres were those of Hornachuelos and Posadas, the latter being founded in 1565 and dedicated to Nuestra Señora de la Esperanza (Our Lady of Hope). In fact it is very likely that the founder was already in Seville when Pope Pius IV officially authorized the Order in his Papal Brief “Piis fidelium Nobis” of 1561. He was almost certainly one and the same person with the Bernardo de la Cruz who was seen in the city in 1564 looking after the hospital patients and, together with “some other people”, drafting the new rules for the Cofradía de la Santa Cruz de Jerusalén (Brotherhood of the Holy Cross of Jerusalem). 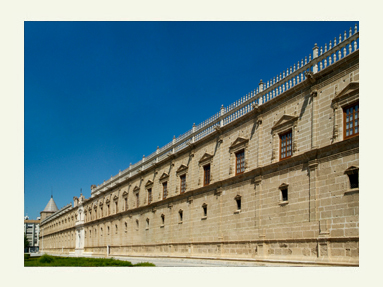 Fray Hernando de la Cruz’s hard work attending the sick was fully concordant with the Order’s rules, which attached the utmost importance to acts of charity with those most in need. To make his efforts more fruitful he strove either to found a new Brotherhood or to attract an existing Brotherhood to the new Hospital of Las Cinco Llagas (Hospital of the Five Wounds, another name for the Hospital de la Sangre) in the northern sector, one of 16th century Seville’s poorest quarters. This he managed to do with the Order of La Santa Cruz de Jerusalén, which agreed with the governing body to move into the building once construction work was finished.

The Basilian monk seems to have been involved in the drawing up of this Order’s Rules, which were approved in 1564 and which encouraged the Order to intensify its charity activities. But this support was interrupted when the brotherhood moved to the Hospital de Convalecientes (Hospital of the Convalescents) in 1571, and the situation became extremely precarious following the Royal Disposition of 1586 calling for the closure of hospitals. Over eighty establishments disappeared, and large numbers of patients now crowded into the larger institutions in the city, especially the Hospital de las Cinco Llagas. 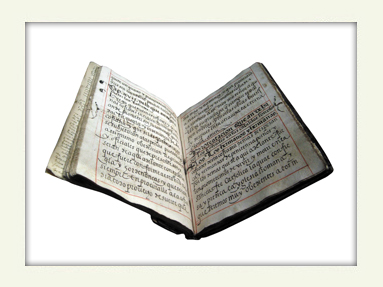 Not surprisingly, Fray Hernando continued his fight to found a brand new Brotherhood which would be able to help care for the sick in the Hospital. He is known to have tried to bring over La Hermandad del Santo Cristo Humillado (Brotherhood of the Holy Christ of Humiliation), but evidently the objectives of that brotherhood did not overly coincide with the form of spirituality prescribed in the Rules of the Basilian Order.

With the Hospital governors opposed to the establishment of a new religious brotherhood on their premises, the final outcome was that Hernando de la Cruz decided to found his own brotherhood in the Colegio de San Basilio Magno itself. The new brotherhood’s Rules would be virtually the same as those of the Order, and its name would be the Cofradía de Nuestra Señora de la Esperanza y Hermandad de Penitencia (Brotherhood of Our Lady of Hope and Penitent Fraternity). 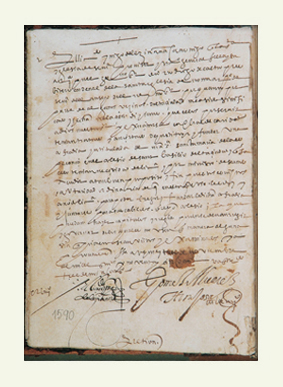 The Rules were submitted for approval on 23rd November 1595, on the same day that authorization was requested for the raising of the Brotherhood, together with a report written by Fray Hernando in which the friar declared: ”I have seen these rules and the chapters therein as ordered by my lord the Provisor (chief judge) and I consider them good; the observance of the same shall be of much service to our Lord God…” The next day Iñigo de Lesiñana, Canon of Seville Cathedral, Provisor and Vicar General of the Archdiocese, approved the creation of the Brotherhood and its Rules.

These were essentially identical to those governing the Basilian monks, and focussed on performing acts of charity with the poor and the sick and enriching the soul though spiritual exercises and penitence.