The figures known as “armaos” (“armed men”) seem to have originated in the 17th century, sometime between 1653 and 1657. They dressed a la milanesa and carried arms rented by the Brotherhood from the municipal warehouses in Triana and La Alhóndiga. 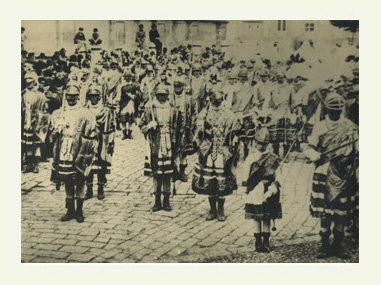 But that initial image did not concur with the academistic tastes prevalent in the 18th century and the group disappeared, as indeed La Hermandad de la Esperanza itself might easily have disappeared thanks to its defiant embrace of baroque aesthetics and its rebellious attitude towards the postulations of the Age of Enlightenment. With the arrival of Romanticism the Brotherhood rediscovered its true identity. When the Easter procession had been restored and duly regulated, the Brotherhood members revived the tradition of the Centuria as an escort for the paso (processional float) of El Señor de La Sentencia. 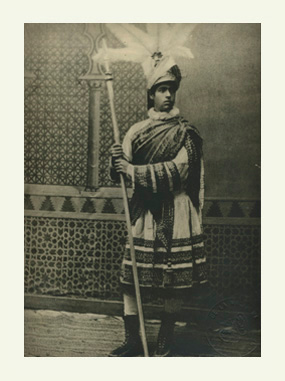 This was to be Juan Manuel’s first attempt at reforming the Centuria, and his success was relatively small in comparison with what would happen in later years. Helmets, cuirasses and other arms were ordered from the iron and lamp works run by Bartolomé López, and tunics from Josefa Rodríguez Ojeda. The uniforms changed over time, but have remained faithful in style right up until the present day.

1915 represented the beginning of a new era for the Centuria thanks to an allocation received from the mayordomo (chief steward) of La Esperanza, José Jiménez Moles, for the purchase of new uniforms and also to the financial support made available in 1914 by the bullfighter Joselito “El Gallo”. 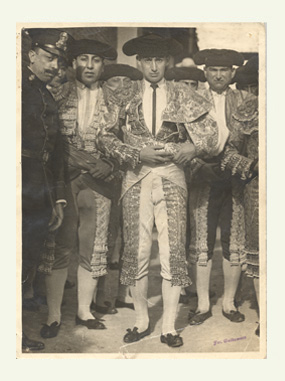 The new “ribbed” uniforms broke away from the anachronistic, Romantic aesthetics which had characterised the Centuria Romana up until that point. The Roman legionaries substituted the mandolín capes which had formerly covered their torsos with close fitting silver plated cuirasses. Their tunics were now all red, edged with gold fringes, rather than a mish-mash of different styles and colours as they had been before. 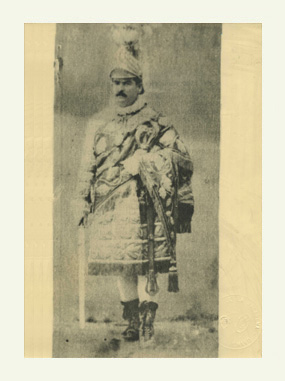 The mandates of Ramón Almagro and Francisco Durán Contreras as Hermanos Mayores en 1930 and 1931 respectively had a great impact on the Centuria. The two men were particularly successful in instilling the idea that the members of the group were brothers in the confraternity rather than hired employees. The disorder which had been habitual in preceding years gave way to more responsible conduct and the Brotherhood began to consider the possibility of increasing the Centuria in size to fifty two members.

This reform was later stalwartly completed by Captains Luque Sevillano, Salvador Rueda Ramírez and Juan Brachi. The days were gone when the minutes of the Brotherhood’s meetings were full of sanctions and suspensions imposed on the armaos and their Captains. On the contrary, they would now acknowledge the excellent work of another of the Centuria’s Great Captains: Antonio Angel Franco “El Melli”, who held office from 1953 to 1967 and who totally reorganized the group. 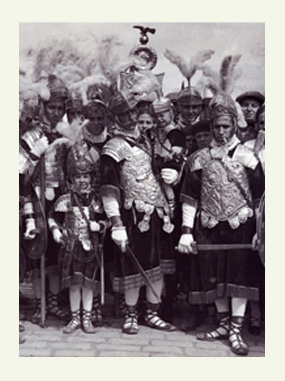 The uniforms which are worn today by the Centuria when they go out in procession were made towards the end of the 1950s by Jesús Domínguez. The design was based on the uniforms for the Captains, Lieutenants and Ensigns created by Juan Manuel Rodríguez Ojeda in 1915. The “ribbed” cuirasses were replaced by the “scaled” type used today, and a number of other innovations were introduced, such as the leather straps tipped with silver lions’ heads that hang along the bottom edge of the breastplates. The new uniforms were paid for with Brotherhood funds and with money generated by the Centuria itself through the sale of the popular “milenas”.

For the Madrugada (Good Friday early morning procession) of 1968 Antonio Ángel Franco was succeeded as Captain by José López “El Pelao”, who went on to occupy the position for 25 years, with José García García as his Lieutenant. ”El Pelao”, fought tooth and nail to defend the interests of the Centuria. He is now considered one of the most important figures both in Seville’s Semana Santa celebrations in general and, of course, within La Hermandad de La Macarena itself. The size of the Centuria was later increased to one hundred members as a result of this remarkable man’s determination and of the deep love for the group felt by Luis de Pablo Romero y de la Cámara, the Brotherhood’s Hermano Mayor (Senior Brother) at that time. The group’s enormous popularity attracted an ever increasing number of requests to form part of it, and those aspiring to join such a picturesque ensemble had to be prepared to wait several years. 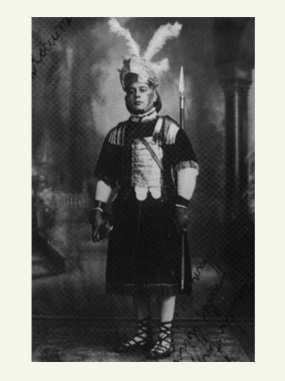 In the Madrugada procession of 1993 the Captain was José García García, who had been Lieutenant during the mandate of “El Pelao“. The position of Lieutenant in the Centuria now corresponded to Manuel Bello Pérez. García García and Bello Pérez would be at the head of the armaos for seven years. This period undoubtedly left a strong impression on the present day members of the Centuria, because this was when the leaders of the group really managed to imbue all those involved with the Centuria, that is to say, both armaos and aspiring armaos, with the idea that nobody had a right to special privileges and that La Hermandad de la Macarena as an institution was of far greater importance than any of its individual members. Coexistence, attendance at religious ceremonies, and of course the monthly meetings in the most hidden corners of the Macarena quarter, were just some of the activities that helped to make everyone pull in the same direction. The number of applicants to join the Centuria grew more and more as a direct result of its fraternal atmosphere and the warm welcome it showed to anyone interested in joining such a unique Legion.

At the end of 1999, during the mandate of Joaquín Saínz de la Maza y Conesa as Hermano Mayor, José García García decided that it was time for his period at the head of the Centuria to come to an end. His substitute was José María Ayala Cardoso, a member of the Centuria. The new Lieutenant would be Manuel Muñoz Pérez. This mandate lasted for two years. 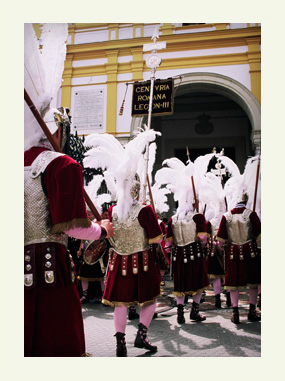 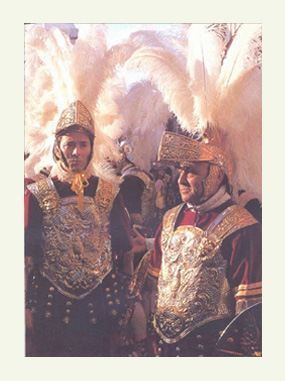 In the epilogue of 2001, Juan Ruiz Cardenas, beginning his term as President, named Captain of the century to Guillermo Ignacio Prieto, occupying the position of Lieutenant Fernando Vaz Calderon. Returning the model pioneered by Jose Garcia, characterized by the union and coexistence of its members, Guillermo Ignacio would serve to his retirement in November 2011, at which time the Board of Government headed by Manuel García García entrusted with the job Captain Fernando Vaz, occupying the Lieutenant Joaquín José Muñoz Garcia, who directed the Century today.