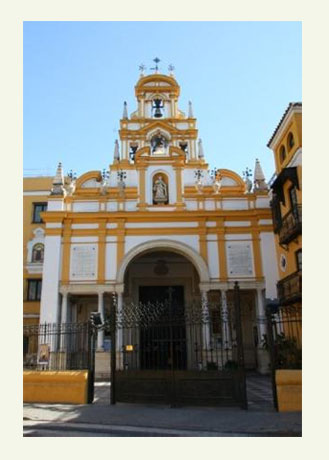 The 18 of March of 1949 were blessed by the Cardinal Archbishop of Seville gift Pedro Segura and Sáenz the new temple destined to lodge to the Titular Images of the Brotherhood of the Macarena, that until then venerated in their chapel of the Parish of San Gil, set afire in 1936.

The declared one in 1966 by S.S the Pope Pablo I SAW Smaller Basilica is a temple of basilical plant, a single ship covered with vault of tube with lateral lunetos and four chapels, designed by Aurelio Go’mez Millán.

Devised by its author in baroque style Andalusian – thus responding to desires of the Governing body presided over by gift Francisco Bohórquez- it is acceded to her through a porch that combines arc and threshold sustained by marble columns, on that is placed a entablamento in which a hornacina is abre that lodges the sculpture that represents the teologal virtue of the Hope. In background of the facade espadaña rises windy, extended later.

The interior decorates with marbles of several colors and paintings to fresh of Rafael Rodriguez, conceived from a centered iconographic program in the Virgin Mother of God.

As much in the presbytery as in the lateral chapels wood altarpieces are placed sea bream, works of the factory of Juan Pérez Calvo. In the major, that lodges to the Stma. Virgin of the Esperanza Macarena, abre the dressing room of the venerated Holder, whose decoration of jewellery is one of best works of Fernando Marmolejo Camargo.
In those of the four lateral chapels the Images of Ntro venerate. Father Jesus of Sentencia, the Virgin of Santo Rosario, Christ of the Salvation and the Employers of Hispano-America, respectively.