Bhelma IV. Heroes of Hope give thanks to the Virgin 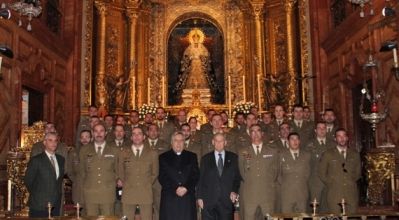 As has become tradition, when they start or finish the missions entrusted to them to ensuresafety and normal pro in Afghanistan, the helicopter battalion Bhelma IV, based logisticsbase in the Air The Copero, appeared before the Blessed Virgin of Hope to give thanks forthe completion of the mission they have undertaken in the Asian country since last August.Chiefs, officers and men passed through the Basilica to remember that they aremessengers of hope. We must remember that an altar with the sacred image of the Virginover the living room of flags in the Spanish detachment in Afghan land, as recalled in his speech the Head of the Battalion, Lieutenant Colonel D. Antonio Rebollo. They were received by the Rector of the Basilica, the Rev. NH. Mr. D. Antonio Borrego Cobos, who ledthe prayers of thanksgiving, of Big Brother, D. Manuel Garcia Garcia, and Deputy Chief Government, D. José María del Castillo Jimenez.