The Brotherhood at the Second Meeting of HH. and CC. Our Lady of Hope Macarena 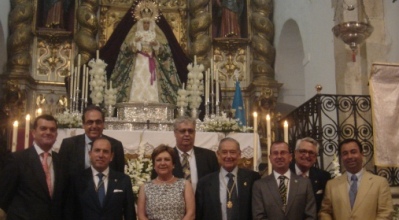 During the past weekend was held in Jerez de los Caballeros the Second Meeting of Fraternities and Brotherhoods of Hope Macarena, organized by the Royal Brotherhood of Our Father Jesus of great love and the Virgin of Hope Macarena, attending the same one representation of our Brotherhood led by our Elder Brother, D. Manuel Garcia Garcia. Four years after the conclusion of the first meeting, the brothers Macarenos arrived from different places over the country have returned to share our devotion to the Virgin of Hope Macarena and strengthen the sincere and profound ties that unite us, dutifully reaching this objective through the work of the Organising Committee and especially to his Brother, Florencio Carrasco Vazquez, General Coordinator, Gregorio Sánchez Martín, and Secretary of the Corporation, Satur Castilla Venegas. This meeting, framed within the work of the Pastoral Plan of the Diocese of Mérida-Badajoz for the year 2012, began in the morning on Saturday with the presentation of credentials and other documentation, and after a breakfast served in the Courtyard of the Church House, participants left for the audience of the former convent of St. Augustine to attend the speech of the Archbishop of the Diocese of Mérida-Badajoz, the Rt. Mr. D. Santiago García Aracil, who spoke on “Identity and mission of the Church of the Brethren in the Church and the world.” In his lecture lively particularly stressed the important role they should star in the laity within the Church and the importance of Christian education within the family, stating also concerned that the Brotherhood “as the Church, going through a difficult time, “encouraging the brothers to reflect on the role they play within their respective corporations and their attitudes as members of the Church, saying that one of the reasons for accepting the invitation to participate in this event The firm is their belief that “the brotherhoods are officially part of the Church and live” and therefore should actively participate in it, ending with the wish that the confraternities are “testimony of virtues.” Here are held the second paper of the meeting that was led by the sculptor and carver Luis Alvarez Duarte, author of the image of Hope Macarena host of brotherhood. In his presentation, full of fervor and devotion samples to Our Lady of Hope, was visiting his link from his childhood to the present: his first meeting with her and like this first glimpse at what made you decide to pursue as an adult would, Friday mornings on the shoulders of his father, the opportunity to be so close to her in virtue of their profession or the opportunity to perform various replicas with different destinations, for it has ever pointed at using any photographs. Using a projector was revealing some details of these images: the enthroned in the town that welcomed us “its accurate replication and the first on-size” the size made in academia to a component of that brotherhood, that went to New York and was blessed at the Cathedral of St. Patrick, which was offered up by the Association of Guilds of Father Ernesto Malaga Wilson Silver and continues to receive worship in the chapel of the Missionaries of Hope of Malaga, which was blessed at the Basilica de la Macarena bound for the Parish of the Macarena neighborhood of Ciudad Kennedy in Bogotá, or last held recently in academia for a family size of the macarena Parras street. All worked like a prayer to her and with the desire to spread his devotion. After lunch of brotherhood and a subsequent visit to various tourist sites, took place the solemn Mass in St. Bartholomew’s Church, presided over by Archbishop Emeritus of Seville, Cardinal Amigo Vallejo, and concelebrated by priests of this city, Rvdos. D. Pedro Alberto Delgado and D. Vadillo Miguel Angel Gonzalez Vizuete, and by the Rector of the Basilica, Rev. Fr. Mr. D. Antonio Borrego Cobos. In celebration intervened Coral Municipal School of Music. In his homily he reflected on the differences that can be observed, like the children of one family, including sororities and fraternities different even though they share the same devotion, and endearing character that emerges in such celebrations. Also considered it essential that the brotherhoods remain authentic and truly live their spirituality, by moving that we have a precious treasure of Hope. Moreover in these times when many of our brothers are suffering and need our help and encouragement. Following this celebration, the Mayor of the City, Ms. Margarita Perez, offered in the courtyard of the house of the church a reception for the participants, thanking the audience participation and highlighting guilds work the host corporation. This event was not held in the Park of the Citadel as originally planned because of the risk of rain. Sunday morning began with the holding of a roundtable with the participation of older siblings in order to draw conclusions about the meeting and the general lines of those held in the future, remembering that the celebration would take place as follows again in Seville in 2016. Act was followed by a Marian in the headquarters of the brotherhood host, the parish of St. Bartholomew, to continue delivering memories and signatures in the Book of Honor. This meeting ended with the conclusion of the procession marches concert by the Municipal Band of Jerez de los Caballeros, who played the works “Spes Nostra,” Farfan, “Macarena” by Cebrian, “Coronation of the Macarena “by Brana,” Esperanza Macarena “by Quintero, León and Quiroga,” Esperanza Macarena, “Morales,” Passion for Macarena “by Jose de la Vega and” Immaculate Mother Macarena “by Pizarro. Also interpreted the holder dedicated to the brotherhood Jerez: “Macarena Jerezana” Albero, “Macarena and Extremadura” by Escobar and “In Jerez, the Macarena,” Carrasco. Concert ended with the premiere of “Macarena, Meeting of Hope”, the component of the band, Sergio Carrasco Auger.