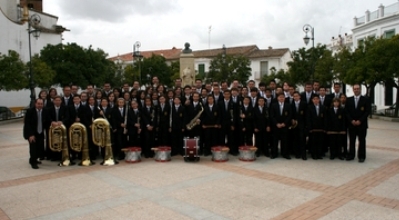 On Friday 15th at 17.30 concert will be held procession marches to The Band Our Lady of Guaditoca, would offer in the Basilica of Santa Maria de la Esperanza Macarena, the 28th February, and had to be suspended because of the impossibility of travel to Sevilla due to inclement weather. The program is the same as was planned for then, ie

began to organize in 1978 the hand of the then pastor of Guadalcanal, D. Antonio Martín Méndez, who gathered a large group of children and young people to learn music theory in the lounge of the sacristy of the parish church of St. Mary of the Assumption of the same town.
On June 5, 1980 saw the first official acts of the then called Band Parish Our Lady of Guaditoca, specifically, enlivened the events organized to celebrate the feast of Corques Crhistie: consisted of a target at 8 morning through the streets of the town and then the musical accompaniment in the procession of the Blessed Sacrament.
In October 1994 takes over the former musical director of the band component D. José María Ortega White, because of the departure of former director of the parish Huévar (Sevilla). In this period include the incorporation into the band of bugles and drums rope, accompanying it at concerts and processions. In the year 1997 is a second relay in the direction of the band, this time taking over the same component also D. Rafael Blandez Criado, alternating that office with the tube several times. From this change begins to mature the idea of creating the Musical Association. To reach this purpose is referred to a group of musicians that constituted Founding Committee, drafted by the relevant laws which will govern the Association. The Board was named General Assembly of the members of the Association of Our Lady Guaditoca Musical. Once approved the statutes of the association, were issued and registered as of March 7, 1997 in Sevilla Government Delegation.
Currently the direction the band is held by D. Francisco Javier Carrasco Jiménez, who officially took the same in 2001, although it had already been exercising since 1998, focusing mainly on teaching courses in music theory and instrument and assembly of different types of concerts: soundtracks , Andalusian music and classical music, among others.
With the entry of such director, the band undergoes a radical change in every way, especially in the way they interpret and assimilation of a variety of compositions of all genres that become part of their repertoire, without sacrificing interpretive works of some difficulty, being currently required by various brotherhoods of Andalusia to accompany their owners in the processions.
On the occasion of the celebration of the Day of Andalusia, the February 28, 2001 the band traveled to Barcelona in order to give a concert of Andalusian music in Guinegüeta Park, playing for the wreath, and another in the town of Villadecans, a village with spirit and Andalusian people. Ours was the first band that played such acts Andalusian. He has also collaborated with the media, specifically in TVE television program “Who knows where?” Offering a concert of various genres. He has also given concerts in procession marches in the parishes of St. Stephen Seville, San Isidoro and Capuchin Convent, also participated in the cries of Seville Country Club, Cry of Costalero in the Seville town of Los Palacios y Villafranca, Cry Easter of Guadalcanal and the brotherhood of Padre Pio of Seville, such as Gloria cries of the Proclamation of Our Lady of the Rosary and Our Lady of Brenes Guaditoca of Guadalcanal and the brother of Munarco exposure ( Sevilla) in January 2004, was also responsible for the band entertain with sounds the IV National Congress of Brotherhoods of Descent, held in Cordoba in the month of September 2006.
Currently the Band Our Lady of Guaditoca has two disks. The first one, that Virgin was released in 2004 by record Footbridge. The second recording is a double CD recorded live on the streets of Guadalcanal in 2005 during the extraordinary procession of Our Lady of Sorrows.
Throughout the year this band offers many processional music concerts and other musical styles of the various populations of the southern Andalusia and Extremadura. It also participates in numerous processions held in the communities of Andalusia and Extremadura, highlighting the province of Seville and Cordoba. Besides his music has led to Barcelona and Vitoria in partnership with the City of Guadalcanal and Andalusian associations of these cities.
Of note is the incorporation since 2006 and to this day, the concert series organized by the Museum of Popular Arts of Seville, conducted in collaboration with the Friends of the Museum in order to salvage the Andalusian folk music of the bands.
On August 4, 2007 is a twinning with the Municipal Band “Fernando Guerrero” in Los Palacios y Villafranca, ratifying the twinning the July 26, 2008 at Guadalcanal. In the summer of 2009, coinciding with the celebration of the feast of Santa Ana, is held together with various local and foreign artists, a concert of song, having received very important among the attendees.
Remarkable is the performance of the operetta “Water, sugar and brandy” made for the celebration of St. Cecilia, 2009. The arrangement of the sheet music for band, is made by the director, Fco Javier Carrasco Jiménez, this project being shortlisted for the Advancement of Culture awards the same year. The June 18, 2010, this operetta was performed at the Great Theatre Falla of Cádiz, with great acceptance. In the summer of 2010, held at the headquarters of the band, I-band Management Course, organized by the band and taught by Master D. Milanés Norman Moreno, with his assistant, Master Juan Manuel Busto. Attending directors of the province of Seville, Extremadura and Valencia.
As recent projects undertaken, highlighting the performance of the musical tale “Peter and the Wolf”, in January 2011, and the completion of the recording of the concert DVD Santa Cecilia 2012, TAXES, where the Band performed a tribute to the greats of rock and pop history. The concert was held at the Cinema Theatre Guadalcanal, with a massive turnout of
neighbors.