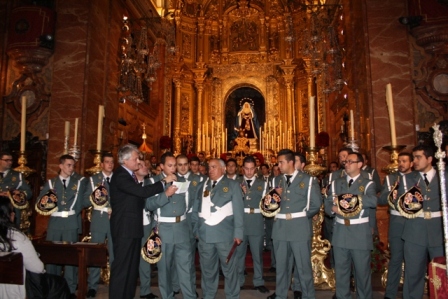 Exordium Pepe Hidalgo recognition by members of the Band of the Century Macarena, which was read by NHD Joaquin Hernandez Acosta, Centuria Macarena horn out on behalf of all of it, as a prelude to the homage paid him during the concert offered in the Basilica of Santa Maria de la Esperanza Macarena, Saturday March 3.
Hidalgo friend, we know that they are nervous now thinking it is someone other than you are talking right now, but do not worry it’s just that your band would like to take this incomparable to devote a few words.

After who knows how many years in this band, and your …. anyone know the age because that is one of the great mysteries of the banda of the century, we’ve always been collecting pictures, plates … and everything with what we given away in various places where we work … today, we find it convenient to have time to get something from those who will surely make you more hope and fill you with pride, as are those components of your banda.

We want to make clear to everyone here that this is NOT and I repeat … NO tire of a farewell tribute far as we have very clear and we’d bet that your bored us to retire and most of those here today we poor league … also begin to say … will Hidalgo, Hidalgo leaves … because their own musicians are showing the way, but they do not know this, is that the sole intention of all my colleagues are with this little recognition , is to give you more excited if possible, more eager to move forward with this project as nice as it lead your Centuria Macarena. It should be noted as a brief anecdote, that when we go with our 20 or 30 years old full of strength .. by Parras Street, we who go dead and is coming to give you encouragement when it would make sense otherwise.

Even if you are our principal, we do not see you well, because for us are like you always tell me .. A second father and would not be fair to forget, grandfather of the century many young children who are heading contributing daily to fulfill their dream someday to arm yourselves to dress like us. I refer to the evidence, as you welcomed us most of kids and if you look around you’ll see parents and children rather than men.Remember that you Hidalgo should be proud to have formed not only musicians, but more important, as is to help form us as people of good … and I know you’re wearing by flag and brag about it.

For those who have not had the luck to meet you in depth, we say that is usually heard in this city when you refer … that if Hidalgo is grumpy, if very hard, if I’m not going to enter the banda until he does not go … (to those last, by the way I recommend you change or withdraw without thought or Armao dress, because here we Hidalgo for a while ..) Well, as I was saying, people who think lightly and without knowing you are wrong, because if so you would not have been able to be in front of a group of people many years and we would have all of you as we are, because every time someone needs something … there is Uncle.

We have very clear before us for best director in the history of this band, not only as “El Tambor de Sevilla”, as it is known (why I say that the boy will have learned something in those years) but by its loyalty and dedication to their brotherhood and for his dedication and perseverance for his two centuries (the big and small).

To finish and not to go any further and as responsible for this band, I think I speak for all my colleagues, if I say I feel fortunate to be part of the Century of Hidalgo and in a few years to say, not only I played. . but what is more important … I met and am friends with Pepe Hidalgo!.

Hidalgo thank you very much for everything and on behalf of my colleagues, we want to make delivery of a painting by one of us and a photo album which today form the banda, to always remember that what we read …