The dream awake. Article the is Paco Robles* 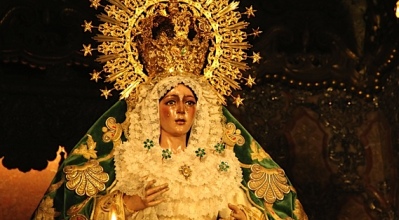 They say his face is asymmetrical incarnation corner to the Annunciation, the waking dream. They say that in reality his name fit mortal man and the desire for eternity that nests in the chest. Becquer said it best: take something divine within us, I know not what to fight against woodworm time marking the rusty needles watches. That poet left his name engraved on the ceramic tiles that give your street name. Bécquer the street had to leave … It appears in the form of light. And he returned to the city and to the world every morning when leaving the confines of the Basilica where Rome surrenders to the convict who tied his hands to repeat his masterpiece: the Macarenos and ensure that there will be another well beyond the arc and the wall.

No need to write your name. It is the dream dreamed of Centuria Armao who left the Legion for a few days sleeping in her arms. Nobody gave a penny for it. Who was the captain grabbed the tissue color ray that leaves the air caught in March when he takes to the streets as a girl in bloom than ever just turned nineteen in the tenth of the twelve verses Caro wrote Romero . That captain Macarena dynasty had its way, and woke Sleep Armao. Joker as one would expect when you consider that this is a spender of Pumareius, Armao asked the permission of his former captain to leave the hospital due to the tavern, where you can drink tabernae October this light that curdles in templete Field Cross.

The hospital, of course, is not named after the neighborhood lent, per secula, seculorum, the neighbor who gives it being. The hospital is located in the foothills of Roman Andalusia bordering the borough of Bami, where lives the writer whose name need not write because it was who sang like no one fact, as no one will ever, these heirs of Julius Caesar each Early surrender to the All-powerful. If you went to the hospital in April Armao dress to bring Hope to children who needed it most, today is a big boy child who just woke up, again, to life. One Friday morning, before dawn, was when he opened his eyes: do we need to explain where these Roman Híspalis on that day and that hour when the moon of Nisan fine burnished gold mantle shrimp?

In Sevilla must not wonder if miracles exist. It is better to abandon the river that leads us and that we make, as you said the chronicler of the city and its Centuria Macarena, the character of this old Híspalis. We are the river and the bridge. And when it’s Friday morning we dream that we are awake before the Esperanza