Presented the 2012 edition of Esperanza Nuestra 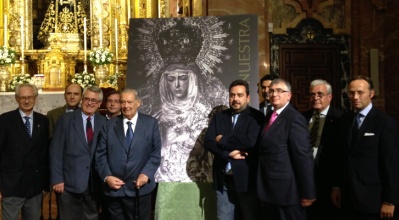 The Hermandad de la Macarena Thursday night presented Nov. 8 at the Basilica the second installment of the Third Period ‘Esperanza Nuestra’. In the act intervenieron Manuel García, Hermano Mayor of the Hermandad de la Macarena, Andrés Amorós, one of the most prominent authors collaborating on this issue, and Carlos Colón, a member of the editorial board of the publication and the author of another article , relying on the presence of other authors and contributors to this edition.
This second issue of ‘Esperanza Nuestra’ consolidates an editorial proposal that seeks excellence in communication between the brothers and devotees Hermandad, a publication of proven quality, able to provide added value.

More than 200 pages that offer a broad and diverse of the Hermandad de la Macarena, the participation of firms covering literary and theological class, in-depth articles on the heritage and history of the Brotherhood by prestigious researchers, portraits of prominent figures Macarenos, interviews brothers meanings and messages of devotees. The photographic image is another pillar of the publication, providing a spectacular and unprecedented gallery of large format photographs, showing a particular perspective and emotive of the Sacred Headlines, Penance Station and all that surrounds the devotional and cultural universe Hermandad de la Macarena.

All complemented with useful information, the detailed summary of the cults, exercise activities 2011-2012 and other sections of interest to all the brothers and devotees.

The team of photographers brings together a large cast of professional and amateur, whose work for this publication provide a different perspective, new and exciting. A compendium completed photographic material funds Municipal Newspaper Library, the file itself dela Brotherhood and archives and private collections.

The re-distributed content into sections whose titles have a symbolic meaning related to the Brotherhood, their owners and the most significant texts that are written about them. Section titles as’ Smile of our soul ‘or’ light and grace of Seville ‘refers to the best of literature macarena and are a tribute to the authors, while others such as’ We are twelve mil’, ‘Wand’, ‘ Cirio purple, green candle ‘or’ Mail ‘tie in with the tradition of the previous publications of the Brotherhood.

This new edition of ‘Esperanza Nuestra’ is accompanied by a gift to the brothers, a facsimile reproduction of that legendary first album of Centuria Romana Macarena, every single historical recovery with five gears classic early seventies, gorgeous testimony that preserves the unique musical sound spontaneous and fast metallic characteristic of the earliest recordings of the band. No doubt, an original and emotional climax to this second issue.