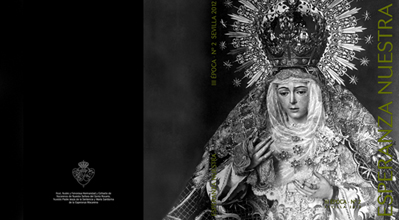 The Brotherhood of the Macarena closes another year. Fits doors as it does with its Basilica on Good Friday morning: saying goodbye to step in front of his universal Virgin, looking from a commendable balance of goals achieved, with the finishing touch of your lavish relief work.

The bulk yearbook just received these days its twelve thousand brothers, long memory is a generous heart and soul that honors not only the famous Brotherhood, but all of Seville, as guaranteed by example amply exit gracefully from curiosity and the analysis submitted to the critics. Macareno record is impeccable. Reassures that this is so precisely where is the mirror of many guilds (and not only in our city but everywhere). But what I want to highlight is the enormous value of the yearbook itself represents the milestone in the history of brotherhood publications.

I know this genus very closely. I got involved in the issue to the point of founding in 1980 “Our Sevilla”, a magazine on Holy Week in Seville, he pursued for four years to fill the vacuum created by the demise of the traditional spring magazines. Had been made possible by the individual initiatives of its directors, outside most of the time the professional practice of journalism, and no other financial support the insertion of ads, made by a procurement based on friendship with those traditional businesses regentaban . The sponsorship rather than advertising, was the reason of those aids essential to raising a family eminently cofrade press. It was priceless what we should in those days to Rafael Salvatella for “AMOR” by Cipriano Gomez Lazarus “At the foot of the Giralda”, or Manuel Juarez Ferrón “Dawn of Spring”. Not to mention Marin Vizcaino by Bulletin of the guilds and even the embryo of this present volume of “ESPERANZA NUESTRA”. If anyone is interested in this topic itemize, you see in the newspaper library studying Ramon Martin Cartaya that ABC picked up in a Lenten series eighties.

Nothing has gone as far as this “Our Hope” published annually by the Brotherhood of the Macarena, once again leading the way. It is so interesting that might be beyond the reach of the brothers who receive, for sale to the general public.

I never cared much a brother publication. Or, to save the good faith of those who were responsible for other cases, at least not achieved a result like this in La Macarena. A delicacy. There is a close relationship between the mainland and quality content, between the graphics and literature.

It is a set of choices aptly well made, some as basic as decisive, as with the format, layout or type of matte paper. And as for his illustrations, extending its pages in the proportion of water to the planet, it is surprising to see the originality of most, very difficult at this point for a multireproducida Brotherhood. We demonstrate that remain profiles and views to discover. The trick is to look good, to photograph any trace of novelty. Here are true explorers of perspectives.

The texts are superb and without errors, which betrays a scrupulous task of proofreading. And noted as a superb example of relevant literature from Manuel Mantero, from the University of Georgia in the United States. He has a doctorate from the phonetics of the Holy Week in Seville.

Combining this with the wonderful story, “Our Hope” is a newsletter?? … In any case, an unclassifiable so well done, that is the publication itself which itself tends to the difficulty, the challenge and the obstacle of being equaled or exceeded in the coming year.