Romans under the Arc 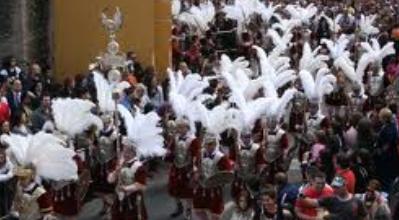 Inside the basilica, the silence of the vigil macarena. Outside, under the arch, caroling armaos guitar, key chains and bottle of brandy. Inside the Basilica off the half-light of the candles showed hope as many generations must have seen in the chapel of San Gil from 1653, itself light illuminating the darkness broken only by the quiet wicks. Outside, under the arch, arm yourselves also returned to San Gil reminding the mother, sad and sorrowful, a Brown Scapular your child began when the wheel of a car in the Arco de la Macarena caught him. Inside the Basilica a silent crowd, like every night that Hope is in levees, watched over her, praying with the heart, speaking with his eyes, in that deep silence macareno that is unlike any other. Outside, under the Arch, the Arm opened the door of the wall that ye enter Christmas in Seville.

Arc and carols were as serious as the silence of the Basilica. The gathering of the brothers and devotees to the Virgin was so quietly cheerful as the thunderous joy of the Century Flemish. Outside was the joy, the applause, the voices, the music of a Chicotá of Hope. Inside was dilated to fill the morning that eternal moment of silence that is done when the passage of the Macarena Arria and, as if obeying the caller, the noise is quiet, and seems to hear the slight tilting of the anchor after the lattice of transparent crown. And both were the same, that the universe is wealth macareno contrast, no contradiction.

Macarenos Romans defended by armor cold brandy a December morning, singing carols under the Arch, while in the Basilica, in bright twilight, no meditation and prayer vigil at the Esperanza. So what? The spirited and spiritual, in the end, are not antithetical: share the Latin root spiritus. All is one and the same. How right Juan Sierra thought the Macarena when wanted in white wine, in rosemary and lime dressing. So Hope, humble queen of the humble stored there in your neighborhood, your neighborhood always save it, you will never have better Basilica streets and alleys Macarenos, no altar over the bed of his Victoria Sanchez in a neighboring pen . Today is December 18.