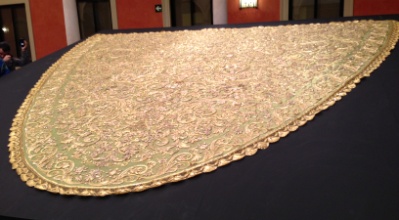 In the central courtyard Cajasol Foundation, located in the former building of the Provincial Court of Seville, was exposed mantle tissue Green Lady of Hope, through the work of restoration and recovery of the original design conceived the brilliant Rodriguez Ojeda.

The event involved the President of the Foundation Cajasol, D. Antonio Pulido Gutiérrez, who welcomed and thanked the Brotherhood’s decision to present this work of art, in the halls of that institution. Also speaking, the representative of the embroidery shop where the work was performed, and Fernandez Enriquez, who showed the same industriousness. Similarly, Andrés Luque NHD Teruel and spoke on behalf of the members of the technical committee was formed, with members of the Governing Board, discovered the hard work that has enabled tracking the completion of this work he dreamed Rodriguez Ojeda. The mayor, Juan Ignacio Zoido NHD Alvarez, closed the ceremony.

Big Brother’s words thanked all involved with these words.

“Making a cloak for the Virgin of Hope, making every effort to the limit, which fills the desire of those who want to make offerings in fierce devotion to the Blessed Virgin.”

This was reflected in the minutes the agreement that the rulers of the Brotherhood took the June 14, 1929, entrusting the realization of that dream who respond that “they filled their dreams with devotion to devote his whole life his last efforts “Juan Manuel Rodriguez Ojeda.

The mantle tissue of the Virgin of Hope, released in the Easter of 1930, became the dream of Juan Manuel and many Macarenos who were eager to add their, on many occasions, humble contributions to public subscription headed by His Majesty King Alfonso XIII. Ilundain Cardinal, who blessed him on Good Friday in San Gil, warmly congratulated the Governing Board and the embroiderer therefore considered a great work of art.

The time use, and interventions have altered the mantle and admired the Seville Holy Week visitors of the American Exhibition, deteriorated materials and altered the design was conceived.

The mantle tissue recovery led, we believe, a milestone in the history of the restoration of embroidery that is part of the heritage of the Brotherhoods and Brotherhoods. As our ancestors in 1929, we have extreme, in this work, our effort in recent years, devoting all human and material resources that were available to us to achieve the best results when it is hoped, always prevailing rigor, professionalism , the care, the requirement itself and the pursuit of excellence above any other parameter. With an ever-present objective: return the garment to its original state. Color admire what we knew only in sepia. Retrieve the dream of Juan Manuel.

It has been a long process which involved professionals, technicians and consultants that the Brotherhood considered and considers candidates for an intervention of this magnitude, to whom we are eternally grateful.

A Rafael de Rueda, illustrator and graphic designer, because its reclamation work based on the original drawing little photographic documentation of the time the design has returned to the lines that Juan Manuel drew with charcoal in the backyard in the summer heat , 1929.

A House Garin, of Valencia, to develop exactly the same fabric as his countrymen Lopez House for over eighty years.

Al Fernandez embroidery workshop and Enriquez, Brenes, and Embroidery of the Trinity, by converting their professionalism, their work and their hands and embroiderers in Carmen Cobos, Matilde Daza, Aunt Pepa and other masterpieces , matrons and apprentices “half spoons” Street Workshop Duque Cornejo.

A Espadero Pepe, for bringing back the blonde who went over in that Juanita Reina ABC cover of a Holy Thursday.

Most especially, the members of the Commission responsible for monitoring the work: Concepción Álvarez Moro, Gabriel Ferreras, the Andalusian Institute of Historical Heritage, and Andres Antonio Luque Mañes Manaute Teruel, faculty, all art historians, technical area conservation and restoration of Andalusia and top specialists in embroidery, which, along with several officers of the Governing Board, have worked constantly and carefully in the graphic documentation and archives, art direction, technical advice and supervision of work for months.

Our gratitude also to Cajasol Foundation in the person of its president, Antonio Pulido, for the transfer and collaboration space for the celebration of the exhibition that opened today, and the Hon. Mr. Mayor, Juan Ignacio Zoido, for their assistance. Also the Mayor of Seville then attended the presentation and blessing of the mantle in 1930.

Finally, I give my sincere thanks to the Brotherhood of the Macarena. A former Board of Directors, chaired by Juan Ruiz Cardenas, as the initiator of the negotiations that launched the restoration process. My Board of Governors, for his confidence in himself and his magnificent work of monitoring and coordination of work. And all the brothers of the Macarena, for waiting patiently to finalize this work, allowing one piece so important and dear to our heritage remain away from home for so long.

Next Friday, Our Lady of Hope will wear the mantle tissue as we see in the old photograph of his blessing day in San Gil, a product of the last dream, from the illusion of life, the man who clings to the handle of his step as if to anticipate the future that awaited him just seven months later: stay forever with the devotion of a lifetime. May the Blessed. Our Lady of Hope permits and reward those who made this dream possible to recover greater glory and better service to the Brotherhood of the Macarena. “