REFLECTIONS ON THE ELECTION OF S.S. FRANCISCO I. 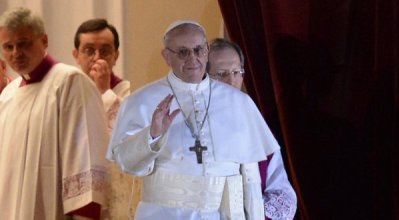 On March 13 after five votes was elected as the new pope Cardinal Jorge Maria Bergoglio, Archbishop of Buenos Aires, who will govern the future of the Church under the name of Francis I.

On 12 March began the conclave in which 115 cardinals would choose a successor to Benedict XVI. Some of these cardinals have come at different times to the Macarena Basilica to venerate Our Lady of Hope.

The more times cardinal visited the basilica is none other than Cardinal Emeritus of Seville, Carlos Amigo Vallejo. The first time I did it was in 1975, as Bishop of Tangier, to preach the Triduum of the Coronation of the Virgin, repeating in 1977 with the septenary to the Blessed Virgin of Hope. At that time he became a brother of the Brotherhood. A few days after his inauguration as archbishop of the Archdiocese of Seville, Fray Carlos visited the Basilica on July 5, 1982 to prostrate before the Blessed. Our Lady of Hope. Until he moved to Madrid, already retired archbishop of Seville, came regularly every year to preside over different functions, celebrate the sacrament of confirmation or privately, to pray to Our Lady of Hope. The same day that John Paul II announced his appointment as cardinal knelt before the Virgin of Hope begging “to continue with fidelity to the Holy Church, Diocese of Seville and a beloved Brotherhood of Our. Father Jesus of Judgment and Blessed Mary. de la Esperanza Macarena “.

Sudanese Cardinal Gabriel Zubeir Wako, Archbishop of Khartoum, came on June 10, 1993, visiting the temple and its dependencies. On the eve of the feast of the Assumption of 1998 was Francesco Monterisi, then Secretary of the Congregation for Bishops and current Emeritus Archpriest of the Basilica of St. Paul Outside the Walls, by signing the Book of Honor and praying to Mary to bless “the Brotherhood and all of Seville.”

The former papal nuncio in Spain and current Major Penitentiary, Manuel Monteiro de Castro, went to the temple on May 21, 2000. Last year our Guild awarded the Jubilee Year. On October 12 of that year was the Archbishop of Lima and Primate of Peru, Juan Luis Cipriani Thorne, who after raising their prayers to Mary wrote in the Book of Honor: “With great joy, and full of gratitude, I bow! Mother of Hope Macarena! offer love the Peruvian people and especially of the Archdiocese of Lima. My affection for this wonderful Guild meets faith of this beloved Sevilla “.

On March 4, 2011 was the archbishop of Munich, Reinhard Marx, who visited the Basilica and the new museum showing macareno surprised both by its content and layout of these.

Cardinal Prefect of the Congregation for the Causes of Saints, the Salesian Angelo Amato, presided over the solemn function as the culmination of Septenario in honor of Our Lady of Hope on 18 March 2012. Previously, in 1995, also participated in the Marian Congress organized by our Brotherhood to mark the fourth centenary of the founding of the Brotherhood. In that year also visited our headquarters Cardinals canonical Velasio de Paolis, President Emeritus of the Prefecture for the Economic Affairs of the Holy See, and Antonio Maria Rouco Valera, Archbishop of Madrid.

The current Secretary of State Bertone Tarcicio also made a private visit in 2009.

Although the newly elected head of the Catholic Church has not visited our city, several members of the hierarchy Argentina have visited the Basilica Macarena.

In 1962, Monsignor Miguel Raspanti, Salesian bishop of the Diocese of Morón Argentina visited the temple, standing in front of his diocese to meet the statutory age in 1980. The visit was accompanied by Franciscan Auxiliary Bishop of San Juan, Ildefonso Maria Sansierra Robla. Months after the Canonical Coronation of Our Lady of Hope, on December 11, 1964, was another Salesian, this time Mariano Pérez Carlos Eslava, Archbishop of Salta, who prayed to the Virgin of Hope, asking her motherly blessing. Justo Oscar Laguna, Auxiliary Bishop of San Isidro, did so on September 14, 1975, devoting his episcopate to Our Lady of Hope, returned again in 1984, and as Bishop of Morón.

On 18 January 1982 the then Auxiliary Bishop of Avellaneda, Héctor Rubén di Monte, who subsequently occupy the Archbishopric of Mercedes-Luján, thanked the Virgin of Hope a chance to bow down to your plants. In 1987, Richard Murtagh, head of Caritas Argentina, visited the Basilica next to a large group of prelates.

Finally, Argentine Cardinal Eduardo Francisco Pironio, President of the Pontifical Council for the Laity, wrote the June 11, 1993 in Book of Honor: “Today is a day of grace for me. I visited the Brotherhood of Our Lady of Hope Macarena. I have looked very closely and very Paschal from inside the face of Our Lady (pain and hope). I leave in the heart of Mary all my concerns and let all my Brothers cordial and paternal blessing. Hail, Our Hope “.