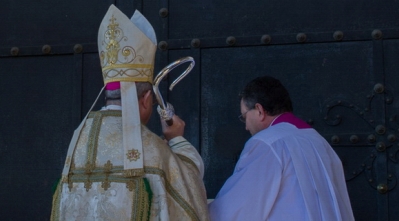 The Hon. and Rt. Mr. D. Juan Jose Asenjo, Archbishop of Seville, has seen fit to devote his weekly letter, reproduced in full, the newly opened Jubilee Year Macareno. The Brotherhood of the Macarena deeply appreciates the detail and the words with which you honor your pastor and pray to the Blessed. Virgin to accompany him on his work as head of the Archdiocese.

On June 1st I had the honor of chairing the opening Eucharist of the Jubilee Year of Nuestra Señora de la Esperanza Macarena, that Pope Benedict XVI gave us the fiftieth anniversary of his papal coronation on May 31, 1964 Thanks to the request of Cardinal Bueno Monreal and goodness of Pope John XXIII. Fifty years before, will do next hundred years, the March 14, 1914, his coronation took place popular, at the initiative of the then Government Board, who sent styling a beautiful golden crown with parts donated to the Virgin crowd of devotees. The ceremony, held in the parish of St. Giles, had the private and informal character, even though it was present Archbishop of Seville, Cardinal Santos Almaraz, although it was the canon lectoral, Muñoz and Pabon, who deposited the crown on the brow of the Virgin, amid the applause of the city, music and festive gunpowder.

Gladly dedicate my weekly letter to remember these milestones in the history of the Brotherhood of the Macarena. Popular piety has meditated over the centuries in the fifth glorious mystery of the Rosary “Coronation of the Virgin Mary as queen and mistress of all creation. ‘” The apostolic letter “Rosarium Virginis Mariae” of Pope John Paul II introduced in contemplation with these words: “In this glory, which puts Christ’s ascension to the right hand of God, is raised to She herself with her assumption to heaven, anticipating, by a unique privilege, the destiny reserved for all the just at the resurrection of the flesh. ” The contemplation of the coronation of Mary carries our hearts toward ultimate realities, joyful and final in our lives. She, like scoop, body and soul participates in the glory of his Son. The pilgrim Church She discovers his deepest vocation, which is nothing to participate in the Heaven of the Lord’s Passover.

The Coronation of Mary as Queen and Lady of Heaven and Earth has been taught by the Second Vatican Council as truth pertaining to the faith of the Church (LG 59). The tradition has always been interpreted as referring to the Virgin the words of Psalm 44: “Standing, to your right is the queen, adorned with gold of Ophir.” The Apocalypse, meanwhile, presents Mary as the woman “clothed with the sun, the moon under her feet, crowned with twelve stars” (12:1). Both biblical texts are reflected most beautiful Marian iconography and form the starting point of the liturgical rite of the coronation of the images of the Virgin which have an extraordinary veneration by the faithful.

In the New Testament expresses crown participation in the glory of Christ and is a sign of holiness. St. Paul expects to receive on the last day of the righteous Judge, together “with all those who have longed for his appearing” (2 Tim 4:8). James speaks of the “crown of life” to receive those who persevere in the faith (Jas 1, 12, Rev. 2:10), St. Peter assures us that it is “the crown of glory that never fades” (1 Peter 5:4), and, again, St. Paul is presented as the “incorruptible crown” (1 Cor 9:25), the glory unparalleled substitutes ephemeral and happiness of this world.

God grant that this Jubilee year is for all members of the Brotherhood of Our Lady of Hope Macarena and her numerous devotees, among whom I count myself, a true moment of grace, truth to renew our Christian life and we remember that our first duty as a Christian is to aspire with all our strength to holiness, each in their own state and condition. Mary, crowned by God the Father in her assumption into heaven, and the Church as the fruit of love and affection for their children, is the most perfect model of collaboration with the grace and willingness to accept and endorse the plan of God. That is precisely the holiness to which she encouraged us, and what we have her powerful intercession.

The event we celebrate is also a call to commitment to evangelization. Our Lady gave the world the Savior. Like her, we are obliged to announce it, deliver it and share it with our brothers to the breath which is the Star of the New Evangelization, as John Paul II called the monastery of La Rabida in 1993. She will join us in this urgent task in our Archdiocese.

I end my letter congratulating the Macarenos heart. For them and for all devotees of this title endearing in Seville in Spain and beyond our borders, my fraternal greeting and my blessing.