Presentation of Our Hope 2013 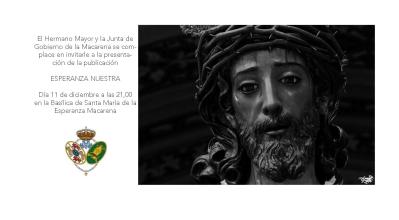 Next Thursday, December 11th, at nine in the evening, in the Basilica of Santa Maria de la Esperanza Macarena, will be presented the number for the year 2013 of Hope Our, publication extraordinary host took his first numbers of this III era.

This year’s edition will be surprised by the quality of the contributions, both-written with renowned firms, as in the last edition, the texts have been developed specifically for the publication of the Brotherhood of the Macarena-like graphs, in which significant image galleries included, highlighting the profusion of images from the last season of penance, and I documented the important research collaborations and literary completing this new issue of a publication that has been established as a reference for consultation between our Brothers .