Coexistence of Youth Groups of Students and the Macarena 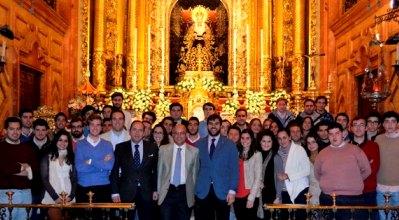 On Wednesday 21 March, at the offices of the Brotherhood house, held its annualYouth Groups coexistence of the Brotherhood of the Macarena and Students, this year coinciding with the anniversary of the replacement LXXV to the cult of MaryBlessed Hope of Macarena, in the central church of the Annunciation, the former seat canon of the Holy Christ of the Good Death and Our Lady of Anguish.
The event began with a lecture by professor D. Andres Luque Teruel, entitledJoaquin Castilla of brotherhoods design of the Macarena and Students. When completed the rapporteur, NHD Teruel Andres Luque, received a framedreproduction of the design, prepared by Joaquín Castilla, the robe of Our FatherJesus of the Judgment, and to donate N ª M ª D ª Queen Juana. Similarly, the president of the Student Youth received another box with a picture with the imageof Our Lady of Hope, as it appeared the day was the cult record seventy-fiveyears.
Once the ceremony, the two younger groups, went into the Basilica, to pray beforeour headlines, concluding with fraternization in the home offices of theBrotherhood.