Thanks to the commission of the Mantle Tissue 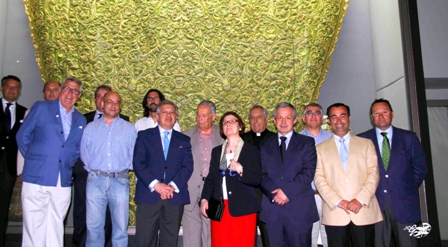 On Thursday, May 9, in a simple and moving ceremony, the Brotherhood of the Macarena, represented by his brother Mayor and Board of Governors, wanted to show his sincere appreciation for the work done during the last three years to technicians who, along with several officers of the Board, have formed the committee’s wish restoration green mantle tissue of the Blessed. Our Lady of Hope, a work designed and executed by Juan Manuel Rodriguez Ojeda in 1930 successfully recovered in their original splendor design and last Friday, in which the Blessed wear it again. Virgin.

Technicians who have been part of this commission, whose direction, advice and control of the work has been exhaustive and permanenete during the months that has carried out the intervention, are Gabriel Ferreras, Antonio Mañes Manaute, Concha Alvarez and Andres Luque Teruel .

The intervention has enabled the recovery of the original drawing through the painstaking reconstruction based on old photographs by the artist and designer Rafael de Rueda, tissue identical to 1930, made in the House Garin 1830, Valencia, and the appearance and initial arrangement of pieces of embroidery work executed in embroidery workshops and Trinidad Fernandez Brenes Enriquez.

It also gave a reminder in thanks to Fernando Morillo for the realization of new poyero output.