Brana’s music will ring in the Basilica 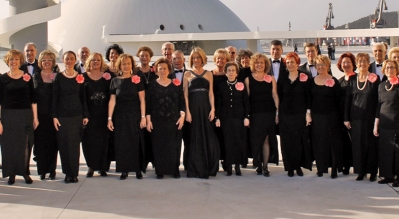 The Choral Association Avilesina , accompanied by the Chamber Orchestra of the Conservatory Julian Orbón , under the direction of Jose Maria Martinez Sanchez , will be the musical groups that will participate in the Eucharistic celebration to be held on Saturday, October 5 , after Sabatina the Blessed Our Lady of Hope .

During the Eucharist , these formations arrivals from the Principality of Asturias , will perform Mass at Sacred Heart of Mary , of Peter Brana and the Ave Maria de la Macarena , by the same author , played by the soloist Rosa Jorquera Pelaez . Likewise verse sounded ” Redde ” Miserere , played by Pilar Perez and Mud cited above, Rosa Jorquera .

Prior to the start of the Sabatina , the Choir will perform a concert of works composed by Brana , beginning the same around seven in the evening.

With this concert , sponsored by the Asturian Center of Seville , which the teacher Brana and her daughter , Coral Brana , honored with the Golden Clog and Honorary Member respectively , intended to extol the Jubilee Year to mark the fiftieth anniversary of the Coronation of the Virgen Macarena in collaboration with the acts of the Basilica de la Macarena which this year are continuous and let footprint Pedro Brana affection felt for the Virgin of Hope, author remembered processional march ” Coronation of the Macarena ” .

Coral Avilesina Association was founded in 1904 although it is from 1983 when his musical career really starts always under the baton of important directors who have always known Coral lead to a prominent position in the Asturian music scene .

Annually participates in concerts both in Asturias and outside this community thus bringing his musical craftsmanship virtually most of the Spanish provinces and even abroad where his tour highlight French Brittany or her performances in S. Augustine Florida , Tampa and Orlando in the United States.

His repertoire includes a wide variety of topics both popular and religious polyphony as well as styles ranging from the Renaissance to the present day , not forgetting the section on Asturian polyphony . The interpretation , with the Orchestra and Chorus of the Royal Conservatory of Aviles Mass Mozart opera D. Pasquale or Cuban zarzuela ” Cecilia Valdés ” are good examples of this .

Today they form the Coral 41 mixed voices whose main desire is still to promote a love of choral music wherever they operate . Its director is Elena Baigorri Saenz. In many years of musical activity have been countless mentions and awards won highlighting among these the Third Prize in the International Competition Polyphony of Torrevieja ( 1989 and 1990 ) , Second Prize in the Contest of Ejea de los Caballeros (1991 ), First prize at the Choral Competition in Coruña Noia (1992 ) and 2nd prize in the nineteenth edition of the competition shows and Folklore Ciudad de Oviedo (2011 ) .